Gingrich on Russian Investigation: ‘The Fix Is In’ 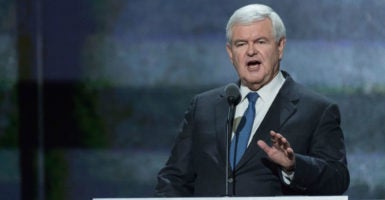 “The fix is in,” Gingrich said. “This is the establishment counterattacking legally when they lost politically.”

Gingrich is specifically concerned about the fact that employees at Mueller’s ex-law firm, WilmerHale, gave $326,798 to Hillary Clinton in the run up to the 2016 presidential election, compared to the $628 that employees donated to Donald Trump.

Mueller, a distinguished attorney who served 12 years as FBI director under Presidents George W. Bush and Barack Obama, was appointed to serve as special counsel for the Department of Justice in its investigation of any links or coordination between the Russian government and individuals associated with Trump’s campaign.

Since his May 17 appointment by Deputy Attorney General Rod Rosenstein, Mueller has put together a team of lawyers, including former prosecutor and WilmerHale partner Jeannie Rhee and former DOJ attorney Andrew Weissmann.

“I love this in terms of transparency, [Rhee’s] job was to defend the Clinton Foundation against Freedom of Information Acts,” Gingrich said. “I mean, you can’t make this stuff up.”

“Another one was repudiated by the Supreme Court, nine to zero in the Arthur Andersen case, where they said that said he had hidden evidence,” Gingrich asserted.

“The same guy did something similar in hiding evidence against Enron, and four people spent a year in jail who were innocent,” Gingrich said, likely referring to Weissmann.

Gingrich slammed Republicans for not doing enough. “Unfortunately, all too many Republicans are sleepwalking and pretending this is all okay,” he said. “And they don’t do any research. They don’t look at what’s the background to what’s going on here? This is not a fair game. These are people who are out to destroy Trump.”

Gingrich said that when he began digging deeper into Mueller, he discovered some worrisome facts. “You couldn’t make this up if you were doing this for a novel,” Gingrich asserted. ”

“The left is desperate to find a way to defeat Trump,” Gingrich said. “And, they’re desperate—they cannot believe Trump beat them. Therefore, the Russians must have done it.”

Gingrich also asserted that at the Justice Department, among those who were politically active, 97 percent of the donations went to Clinton, compared to Trump’s 3 percent.

“So, when you say to me, ‘Do I worry about Mueller as an investigator?’ I think, ‘Well, do I worry about a department that’s 97 to 3 [percent] that would pick somebody who’s from a law firm which is 99.81 [percent]?’ Uh, as a historian, yeah, I’d worry,” Gingrich concluded. “And then you look at who he hired and it gets worse.”