7 Takeaways From Jeff Sessions’ Senate Testimony on the Russia Probe 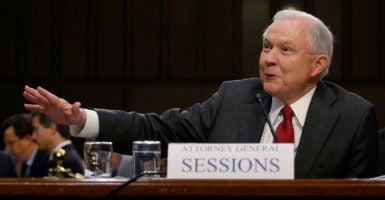 "I did not recuse myself from defending my honor against scurrilous and false allegations": Attorney General Jeff Sessions testifies Tuesday before the Senate Intelligence Committee. (Photo: Jonathan Ernst/Reuters/Newscom)

Attorney General Jeff Sessions, in testimony before a Senate committee, called it “an appalling and detestable lie” for Democrats to suggest he would collude with Russians to undermine the U.S. presidential election.

“I did not recuse myself from defending my honor against scurrilous and false allegations,” @USAGSessions says.

Sessions himself frequently stirred up Democrats on the Senate Intelligence Committee when he answered some of their questions Tuesday by saying, “I don’t recall” or “I don’t recall at this moment.”

They also didn’t like it when Sessions wouldn’t talk about private conversations with President Donald Trump, whose candidacy he supported early on.

The attorney general, a former U.S. senator and federal prosecutor who decided to recuse himself from congressional and law enforcement investigations of Russian interference in the election, clearly took umbrage Democrats’ allegations regarding him and his integrity:

I recused myself from any investigation into the campaigns for president, but I did not recuse myself from defending my honor against scurrilous and false allegations. At all times throughout the course of the campaign, the [Senate] confirmation process, and since becoming attorney general, I have dedicated myself to the highest standards.

Here are some key moments during Sessions’ nearly three hours of testimony, including his thoughts on Trump’s private conversations with FBI Director James Comey, later fired by the president, and his own role in that termination.

Sessions stressed that he determined he would recuse himself from any Justice Department and FBI work on the Russia matter based on a statute, not because he thought he had done anything wrong.

Sessions recalled that Comey expressed concerns to him in mid-February about keeping to appropriate channels for communications between the FBI and the White House.

Sessions said he agreed with the concern, and told Comey to make sure established protocols were followed.

Sessions recalled speaking with Comey, likely on the day after the FBI director’s one-on-one Feb. 14 conversation with Trump in the Oval Office. At that meeting, Comey testified to the same committee last week, Trump told him he hoped he could go easy on former national security adviser Michael Flynn, whose contacts with Russians were under investigation.

“During his testimony, Mr. Comey discussed a conversation he and I had about a meeting Mr. Comey had with the president,” Sessions said, adding:

While he did not provide me with any of the substance of his conversation with the president, Mr. Comey expressed concern about the proper communications protocol with the White House and with the president. I responded to his comment by agreeing that the FBI and Department of Justice needed to be careful to follow department policies regarding appropriate contacts with the White House.

At this and several other junctures, Sessions said he trusted that Comey, a Justice Department veteran, would know what to do or who to consult, and would not be intimidated by the president.

Sen. Mark Warner, D-Va., asked Sessions whether he ever talked to Comey about his job performance before the firing, to which Sessions said no.

But, the attorney general, speaking of himself and Rosenstein, said: “Before I was confirmed and before he was confirmed, we agreed that a fresh start was needed at the FBI.”

Warner expressed skepticism as to why—if that was the case— Comey’s firing didn’t happen until the investigation of Russian meddling in the 2016 election was well underway.

Sessions was adamant that he did not work with Russians to influence the outcome of the 2016 presidential race, rejecting the suggestion as insulting.

“Let me state this clearly: I have never met with or had any conversations with any Russians or any foreign officials concerning any type of interference with any campaign or election,” Sessions said. “Further, I have no knowledge of any such conversations by anyone connected to the Trump campaign.”

Several senators asked Sessions about whether he knew of any leading campaign officials who had meetings with, or colluded with, Russians. At one point, the former senator from Alabama said:

I was your colleague in this body for 20 years, and the suggestion that I participated in any collusion, or that I was aware of any collusion with the Russian government to hurt this country—which I have served with honor for over 35 years—or to undermine the integrity of our democratic process, is an appalling and detestable lie.

Sessions said he doesn’t recall speaking with Russian Ambassador Sergey Kislyak at the Mayflower Hotel when candidate Trump delivered a foreign policy campaign speech there April 27, 2016. He said he did see the ambassador during a public gathering sponsored by the Republican National Committee, and met with Kislyak last year in his Senate office.

Sen. Tom Cotton, R-Ark., mocked aspects of some Democrats’ allegations in the investigation, asking what senators believed happened at the Mayflower Hotel. Cotton first brought up the original focus of the probe:

Did Donald Trump or any of his associates collude with Russia in hacking those [Hillary Clinton campaign] emails and releasing them to the public? That’s where we started six months ago. We have now heard from six of the eight Democrats [on the committee] and to my knowledge, I don’t think a single one of them asked that question. They’ve gone down a lot of other rabbit trails, but not that question.

Maybe that is because Jim Comey said last week, as he said to Donald Trump, that on three times he assured him that he was not under investigation. Maybe it’s because multiple Democrats on this committee have stated they have seen no evidence thus far, after six months of our investigation, and 10 months or 11 months of an FBI investigation, of any such collusion.

Cotton went on to ask Sessions, “Do you like spy fiction?” He rattled off the names of some best-selling authors, then asked, “Do you like Jason Bourne or James Bond movies?”

Sessions answered, “No,” but immediately admitted, “Yes, I do,” to some laughter.

Cotton sounded serious, but in a satirical way:

Have you ever, in any of these fantastical situations, heard of a plot line so ridiculous that a sitting United States senator and an ambassador of a foreign government colluded at an open setting with hundreds of other people, to pull off the greatest caper in the history of espionage?

Sessions thanked him for the question.

“It’s just like ‘Through the Looking Glass,’ what is there,” Sessions said, referring to the book “Alice’s Adventures in Wonderland” and adding:

I explained in good faith, I had not met with Russians because they were suggesting that I, as a [Trump campaign] surrogate, had been meeting continuously with Russians. I said I didn’t meet with them. Now, the next thing you know, I’m accused of some sort of perception of plotting, some sort of influence campaign, for the American election. It’s just beyond my capability to understand.

5. Any White House Tapes ‘Probably’ Should Be Preserved

Sen. Marco Rubio, R-Fla., asked whether Trump had a recording system in the White House. Sessions said he didn’t know.

Rubio: “If there was such as system, would there be an obligation to preserve those records?”

In a tweet, Trump had suggested that Comey better hope no “tapes” of their conversation exists.

6. Mum on Private Conversations With Trump

“I cannot and will not violate my duty to protect confidential communications with the president,” Sessions told senators during his opening statement.

That vow nettled Democrats again and again. At one point, Sessions responded to Sen. Dianne Feinstein, D-Calif., that under longstanding Justice Department policy, “I’m not able to discuss with you, nor confirm or deny, conversations with the president.”

“It would be easy to answer no if it was no,” Feinstein said of whether something was said in a particular conversation.

Sessions replied: “It would be easy to answer yes if it was yes, too. Both would be improper.”

Along the same lines, Sen. Ron Wyden, D-Ore., accused Sessions and other administration officials of “stonewalling.”

Wyden had one of the most fiery exchanges with Sessions, asserting, “Americans don’t want to hear that answers to questions are privileged and off limits, or that they can’t be provided in public, or that it would be ‘inappropriate’ for witnesses to tell us what they know.”

Sessions: “Sen. Wyden, I am not stonewalling. I am following the historic policies of the Department of Justice.”

Wyden, later: “The question is, Mr. Comey said there were questions with respect to [Sessions’] recusal that were problematic and he couldn’t talk about them. What are they?”

Sessions, angrily: “Why don’t you tell me? There are none, Sen. Wyden. I can tell you that for absolute certainty. This is a secret innuendo being leaked out there about me, and I don’t appreciate it.”