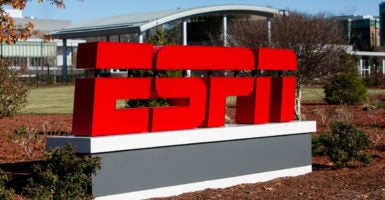 There is a whole host of reasons conservatives have come to believe that ESPN has a left-leaning bias.

First, there was the network’s decision in 2015 to give the Arthur Ashe Courage Award to former Olympian-turned-reality TV star Bruce—now Caitlyn—Jenner.

Apparently, Jenner’s decision to publicly share his transgender journey, many years after his sports career was over, was more courageous than that of 19-year-old college basketball player Lauren Hill, who publicly lived out her battle against brain cancer on the court from 2013 to 2015, raising awareness and over $1.5 million for research before succumbing to the disease in April of that year.

Then there was the decision by the network to pull a golf tournament from one of then-candidate Donald Trump’s golf courses because it didn’t like some of his comments, but apparently had no problem allowing its ESPNW network to give voice and coverage to the Women’s March on Washington where one speaker, Madonna, said she wanted to blow up the White House. And naturally, the same network was nowhere to be found covering the March for Life.

And more double standards were on display when no action was taken by the network against ESPN sportscaster Tony Kornheiser when he compared the tea party to ISIS.

Yet the network did take action when former major leaguer-turned-ESPN analyst Curt Schilling posted comments on Facebook objecting to the push to open up bathrooms to the opposite sex. Schilling was promptly fired.

Like I said, there are plenty of examples showing ESPN’s lurch to the political and cultural left.

And now, in a public relations attempt to prove it doesn’t have a liberal bias—or at least that its viewers don’t think it has a liberal bias—it again shows just how real its liberal bias is.

In a survey of viewers (only select parts were released) conducted for the network in early May, of respondents who said they detect bias in ESPN’s coverage, 63 percent said it was a liberal bias.

But that isn’t how the network spun it.

It left that number out of its official statement and instead only referenced the 30 percent who said they thought the network expressed a conservative viewpoint.

When asked by the Washington Examiner why they didn’t include the 63 percent figure, a spokesman for ESPN said it was “implied.” When Sporting News asked the same question, the reply was that they were trying to keep the press release “short.”

Earlier this year, ESPN’s public editor, Jim Brody, stated in a column about the controversy of ESPN wading into the cultural and political arena, “ESPN has made it clear: It’s not sticking to sports.”

But if another study of ESPN’s audiences—this one not conducted by the network itself—is accurate, voters of a certain political persuasion are making it clear they aren’t sticking with ESPN.

The study of 43 television markets nationally showed that ESPN’s audience, across its multiple channels (ESPN, ESPN2, ESPNU, etc.), is becoming more liberal and that fewer Republicans are watching.

Considering the “Worldwide Leader in Sports” has lost more than 10 million subscribers in recent years, ESPN might want to change its motto—and revisit its game plan.