Afghanistan Has Been America’s Longest War. Here’s What Success Will Look Like. 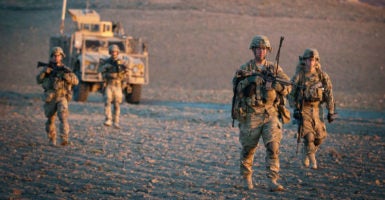 After nearly 16 years of military involvement in Afghanistan, the U.S. should take stock of the key goals it has achieved on the ground. (Photo: Sgt. Michael J. Macleod/Zuma Press/Newscom)

Wednesday’s terror attack in Kabul is a stark reminder of how brutal the war in Afghanistan still is.

A suicide truck bomber drove near the German Embassy in Wazir Akbar Khan, the diplomatic heart of Kabul, and then detonated his bomb amid the morning rush-hour traffic. The blast killed at least 90 civilians and wounded another 400.

This wasn’t the first such attack in Afghanistan, and it won’t be the last. After almost 16 years of war in Afghanistan, it is only natural to wonder: How do we know if we are winning?

Winston Churchill, while serving as a young officer fighting the Pashtuns in the 19th century, explained the difficulty of winning the type of war he faced then and that the United States faces now in Afghanistan:

There are no general actions on a great scale, no brilliant successes, no important surrenders, no chance for a coup de theatre. It is just a rough hard job, which must be carried through. The war is one of small incidents. The victory must be looked for in the results.

When NATO ended its combat operations in Afghanistan and transitioned into a train, advise, and assist role in 2015, the usual fanfare associated with victory in war was notably absent. There were no triumphal parades, no formal surrender ceremony, and no heroic march into an enemy’s capital.

This is not the Afghan way of war.

As Churchill wrote in 1897, “The victory must be looked for in the results.”

In late 2001, just after the 9/11 attacks, there were two main goals in Afghanistan.

First, to deny al-Qaeda a safe haven from which to plan, train, and launch terrorist attacks on a global scale.

Secondly, to remove the Taliban regime from power as punishment for not cooperating with the international community and for harboring terrorism—a sort of 21st-century version of a 19th-century punitive raid on the frontier.

Both were accomplished with relative speed—it can even be argued that this was achieved by the summer of 2002.

As the years went by, the explanation for what U.S. forces were doing in Afghanistan shifted from America’s raw national security needs to vague notions of nation building and “bringing democracy.”

Consequently, the inability to produce what public opinion considers tangible and achievable results 16 years on has disappointed many.

Since our military intervention in 2001, we have focused on the quixotic goals of creating “a strong central government” and a “pluralistic society” in Afghanistan. We have tried accomplishing these goals by “holding free and fair” elections, “tackling corruption,” and building the “institutions of democracy.”

If we fail to achieve these goals, we are presented with doomsday scenarios of “ungoverned spaces,” the Taliban “back in power,” and the establishment of new terrorist “safe havens.”

But this black-and-white view of the situation doesn’t work in a place like Afghanistan. It is a place with many shades of gray.

There is a complex middle ground in Afghanistan, and this is where we are today—and where we will likely be for the foreseeable future.

Few in the United States believe that we have been defeated in Afghanistan. They just think we haven’t met the objectives they expected to be achieved—and that what we have achieved has taken too long and cost too much.

This is not an unreasonable view. We have been fighting in Afghanistan for almost 16 years and will likely have some form of military involvement there for at least 16 more.

An 18-year-old soldier serving in Afghanistan today was only 2 years old at the time of the 9/11 attacks. Thousands of U.S. troops have been killed and wounded and just shy of $1 trillion has been spent. 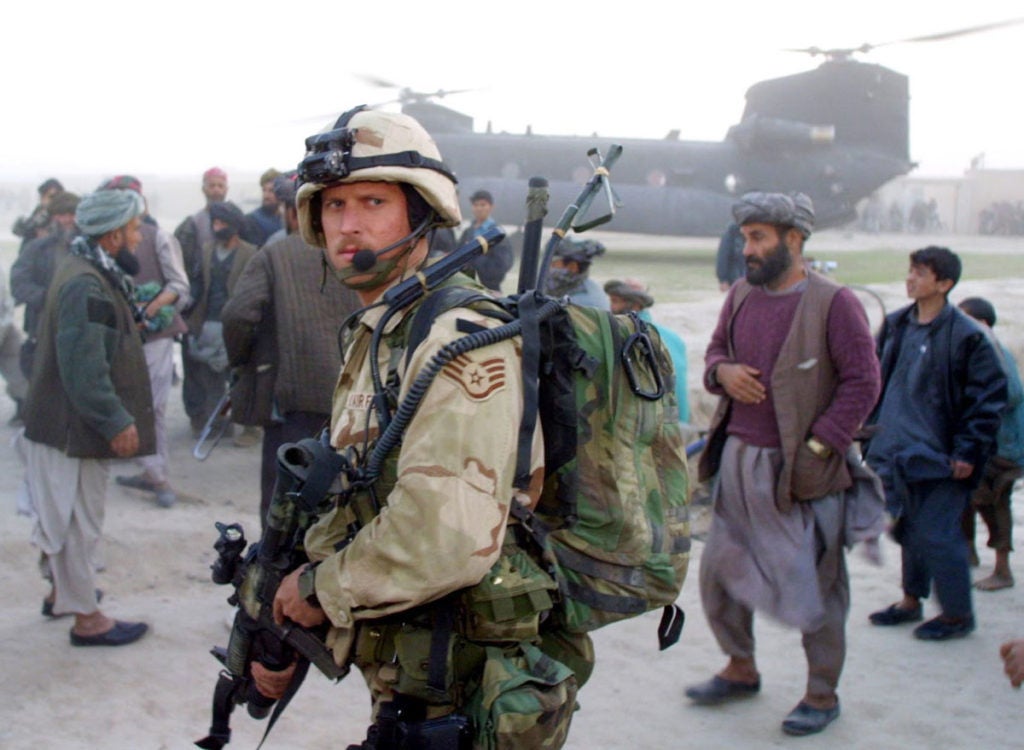 U.S. special forces entered Afghanistan in the fall of 2001 and forged partnerships with Northern Alliance tribes to remove the Taliban from power. (Photo: Pool/Reuters/Newscom)

For years, especially in the earlier days of the war, successive U.S. commanders thought that if one more road could be paved, one more school built, or one more hospital constructed, America could leave Afghanistan just that much better.

Over the years, this focus on nation building—however well intended it might have been—resulted in expectations set so high in Afghanistan that even obvious successes on the security front were not considered good enough.

This created an impossible situation for the U.S. military. With the lofty goals of nation building defining our success in the early days, the only thing most people see today in Afghanistan is failure.

However, a closer look at the situation shows that much has actually been achieved.

After the successful targeting of Taliban leaders, combined with a robust counterinsurgency campaign over the years, the group as a national movement has degenerated into several smaller, weaker, and localized insurgencies—each with a different set of grievances and goals.

Even with today’s horrific attack in Kabul, the level of violence in Afghanistan is nowhere close to its peak in 2011–2012. Al-Qaeda, which once used Afghan territory with impunity, no longer enjoys a safe haven in Afghanistan from which to plan and launch terror attacks on a global scale.

The threat posed to Afghanistan by the Islamic State isn’t even close to being in the same league as the Taliban, and pales in comparison to the terror group’s other affiliates in Syria, Libya, and Yemen.

The Taliban that rolled into Kandahar in 1994 with tanks and planes is a shadow of its former self today.

In 2001, outside of a small rump of territory run by the Northern Alliance in northeast Afghanistan, the Taliban controlled the entire country.

Today, according to the special inspector general for Afghanistan reconstruction’s most recent quarterly report to Congress, the Taliban has “control or influence” in only 11 out of 407 districts across Afghanistan, equaling only 9 percent of the country’s population.

After 16 years of warfare, maybe we should come to terms with the fact that until there is a genuine political settlement between all warring parties and Pakistan stops providing succor to the Taliban, this might be as good as it’s going to get.

Success in Afghanistan is not when 100 percent of its districts are under the complete control of the Afghan government or when there are no more suicide bombings. Nor is success in Afghanistan achieved when every road is paved, every girl goes to school, or everyone gets the right to vote.

Success is achieved when there is a stable enough Afghanistan—when it is able to manage its own internal and external security to a degree that stops interference from outside powers, allowing the country to resist the establishment of terror bases that were there before.

Nothing more and nothing less.

Realities on the Ground

The American public has every reason to be proud of what the U.S. military has accomplished under very challenging circumstances in Afghanistan. It is time that we have a dose of realism of what to expect in Afghanistan and lower our expectations on what is achievable for the future.

Afghanistan won’t be perfect or suddenly become some Switzerland in the Hindu Kush. Unless you are some idealistic dreamer who has never stepped foot in the country, this was never the goal.

For the rest of my life, there will be an insurgency in some form in the Pashtun heartland of the country. This doesn’t mean that the United States has failed. It is simply a reflection of the reality on the ground and in the region.

Through local deals brokered by various tribes, it is inevitable that the black flag of the Taliban will be seen flying in places where U.S. troops were previously fighting and dying just years before.

Deals will be done between local factions that most reasonable people back in the United States would find incomprehensible, if not appalling. Allegiances between local Afghan tribes will change according to the direction in which the tide of success is seen to be flowing at the time.

This is not defeat. This is reality. This is the peculiar Afghan way of warfare in what is a deeply tribal society.

The Afghan military is far from being perfect, but that was never the goal. The goal is to get the forces to a capability where they can manage the insurgency themselves, without tens of thousands of Western troops on the ground.

Paraphrasing Lawrence of Arabia on the Arabs in his famous 27 Articles of 1917, it is better that the Afghans do it tolerably than we do it perfectly.

If the West continues to mentor, train, and fund the Afghan military, then the Afghans will be able to take on the insurgency themselves. Eventually this will establish the security conditions inside which a genuine political process can take place between Afghans, the Afghan way.

This is why President Donald Trump’s upcoming decision to at least maintain, or even increase, the number of U.S. advisers and mentors is so important. One only has to look at what happened in Iraq when President Barack Obama withdrew all U.S. forces to understand why.

With each successful Taliban attack, the inevitable headlines immediately appear about America’s failures in Afghanistan.

But we cannot start seeing every tactical victory of the Taliban as America’s strategic defeat. There will be many more successful attacks like the one seen Wednesday in Kabul.

This is a unique kind of war, one in which the enemy has no problem killing himself to kill others and, for spiritual reasons, actually looks forward to the opportunity.

We need to start measuring success by achievements on the ground and not by unrealistic expectations. We also have to realize that patience is required. Success in Afghanistan will be measured in years and decades, not 24-hour news cycles and 140-character-long tweets.

It won’t be pretty, and there will be setbacks—after all, as Churchill reminds us: “It is a rough, hard job.”

Note: This article originally appeared in The National Interest.