Report Finds Thousands of Noncitizens on Voter Rolls in Virginia 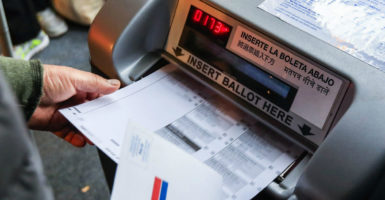 A conservative legal organization has found that thousands of noncitizens have been on voter rolls in Virginia. (Photo: Tannen Maury /EPA/Newscom )

Virginia election officials removed thousands of voters from voter rolls between 2011 and May 2017, according to a conservative legal organization.

In a report released Tuesday, the Public Interest Legal Foundation, a conservative legal group, found 5,556 voters were removed because they were noncitizens and that one-third of those removed voted illegally.

Hans von Spakovsky, a senior research fellow at The Heritage Foundation and a board member of the Public Interest Legal Foundation, told The Daily Signal in an email that the findings of the report are alarming.

“This report should concern everyone,” von Spakovsky said, adding:

It highlights the problem of illegal voting by noncitizens and illustrates the shocking fact that not only do election officials not have any measures in place to prevent this from happening, but that law enforcement apparently has no interest in prosecuting this fraud when it is discovered. And the circumstances of these cases show that what PILF has discovered despite resistance by state officials may only be the tip of the iceberg.

“This report is timed in a way to … keep the discussion fresh in the voting public’s mind because the reality is, we’re told over and over again that this sort of thing does not happen,” Logan Churchwell, communication’s director at the Public Interest Legal Foundation, told The Daily Signal in an interview.

The report also found that 7,474 illegal ballots were cast from the group of removed noncitizens and that some records of illegal voting went back to the 1980s.

“At the instruction of Gov. [Terry] McAuliffe’s political appointees, local election officials spent countless resources to prevent this information from spilling into the open,” J. Christian Adams, president and general counsel at the Public Interest Legal Foundation, said in a statement, adding:

Virginia hid critical information that would have improved election integrity while a political operative-turned-governor vetoed numerous proposals that would’ve prevented alien registration and voting. From [Northern Virginia] to Norfolk and all urban and rural points in between, alien voters are casting ballots with practically no legal consequences in response.

McAuliffe and his appointees also obstructed legislative initiatives to combat voter fraud, according to the report.

The Daily Signal contacted McAuliffe’s office but did not receive a response.

It was a challenge, Churchwell said, to obtain data on the noncitizens.

Some counties and municipalities, like Prince William County in Northern Virginia, cooperated, but others did not comply, according to Churchwell.

The process to verify citizenship must change for the problem to be solved, and Churchwell said he is hopeful that President Donald Trump’s panel to investigate voter fraud, launched in early May, will help.

“The next big discussion that this presidential commission will likely launch into and Congress might even go into thereafter is how do we essentially modernize our voter registration system,” Churchwell said.

The question, Churchwell said, is how to balance state control over voter integrity, but also provide guidance to states so they can better verify the citizenship status of incoming applicants.

“This idea of ‘check the box yes or no’ is not going to work,” Churchwell said.