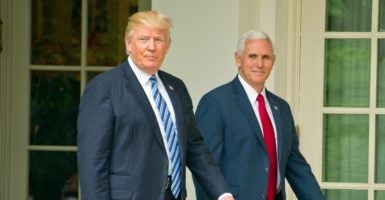 “The president is committed to the thorough review of registration and voting issues in federal elections,” @SHSanders45 says.

“The president is committed to the thorough review of registration and voting issues in federal elections and that’s exactly what this commission is tasked with doing,” White House deputy press secretary Sarah Huckabee Sanders said at a press briefing Thursday after Trump signed the order.

The commission will review policies and practices that enhance or undermine the American people’s confidence in the integrity of federal elections and provide the president with a report that identifies system vulnerabilities that lead to improper registrations and voting. We expect the report will be complete by 2018. The experts and officials on this commission will follow the facts where they lead. Meetings and hearings will be open to the public for comments and input.

Other members will be named at a later date.

Trump has asserted he would have won the popular vote in the 2016 presidential election had it not been for illegal votes cast. However, he hasn’t provided direct evidence. According to a study by Jesse Richman, an associate professor of political science at Old Dominion University, hundreds of thousands of noncitizens could have voted in the November election.

Based on an extrapolation of previous election studies, Richman determined more than 800,000 noncitizens likely voted in the 2016 presidential race, significant, but not nearly enough to overcome Hillary Clinton’s popular vote victory.

The commission is facing some opposition.

“This commission is a sham and distraction,” Michael Waldman, president of the Brennan Center for Justice, a liberal legal group based at the New York University School of Law, said in a public statement.

“It’s simply an effort to try and find proof of the president’s absurd claim that 3-5 million people voted illegally in November. It tries to pivot from the fact that this week Trump fired the chief law enforcement officer in charge of probing whether his advisers colluded with Russia to influence our elections. He fired the person investigating a real threat to election integrity, and set up a probe of an imaginary threat.”

However, since 2016, there have been cases of voter fraud in North Carolina, Nevada, Ohio, Illinois, Colorado and Wyoming, said Logan Churchwell, spokesman for the Public Interest Legal Foundation, a voter integrity group.

“This order is a step in the right direction in response to widespread concern about failures in our election systems that can lead to fraud and other irregularities,” Churchwell said in a public statement. “The issues of faulty voter registration procedures and record maintenance are ripe for review. Perennial questions surrounding the actual scope of ineligible voters and their rates of participation can only be answered when federal offices share information.”

The commission shall be solely advisory and shall submit a report to the President that identifies the following:

(a) those laws, rules, policies, activities, strategies, and practices that enhance the American people’s confidence in the integrity of the voting processes used in Federal elections;

(b) those laws, rules, policies, activities, strategies, and practices that undermine the American people’s confidence in the integrity of the voting processes used in Federal elections; and