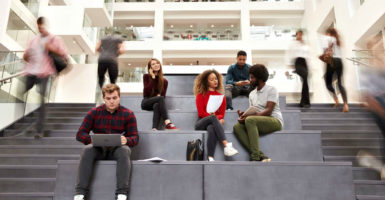 The president's budget would, among other things, consolidate all five student loan programs into a single steamlined program that could prove more fiscally responsible. (Photo: iStock Photos)

While there is still room for improvement, the president’s proposals would be a significant first step in reducing the federal government’s role in higher education and giving much-needed relief to the U.S. taxpayer.

This will be welcome news to taxpayers, who have been picking up the tab for federal employees who, under this policy, have their loans forgiven after just 10 years of payments.

Loan forgiveness in general is bad policy—it encourages students to take on large amounts of debt, often without a plan to pay it back. In particular, loan forgiveness for public service elevates public sector work over the private sector.

The administration is correct to move away from this misguided policy.

Unfortunately, though, the president’s budget would allow all students to take advantage of loan forgiveness after 15 years, only reducing it from 20.

Loan repayment policies that are based on income already protect students from burdensome loan payments. These generous loan forgiveness policies leave taxpayers on the hook for much of the cost of a college student’s education.

The president’s budget also allows students to use their Pell Grant dollars year-round, which may offer needed flexibility to students who want to finish their degree faster.

However, any changes to the Pell Grant system should focus those funds on truly low-income students, and should not increase overall Pell spending.

This budget consolidates the current five loan programs into a single loan option. This will streamline federal lending, and has the potential to infuse fiscal responsibility to the system if terms are aligned with the current terms of the Graduate Stafford Loan Program.

Additionally, all loans should be issued with both an annual and lifetime borrowing cap. These reforms could both help put downward pressure on college tuition prices and insulate taxpayers from high rates of default.

As my colleague Jamie Hall and I recently outlined:

Issuing all future direct loans under a single set of terms would simplify the program and eliminate some perverse incentives in current law … Issuing all new loans under the current terms of Graduate Stafford Loans would generate savings relative to the [Congressional Budget Office] baseline of $9.4 billion under [Federal Credit Reform Act accounting], or a cost of $2.5 billion under [Fair Value] accounting, closer to revenue neutrality than any other loan type.

Additionally, this budget proposes the elimination of loan interest subsidies.

Many economists have pointed to the heavy subsidization of federal student loans as one of the primary drivers of rising tuition. The elimination of subsidized loans will be a smart first step in deflating the student loan bubble and making college more affordable based on market principles.

The president’s proposal overall reduces the federal government’s role in higher education and will encourage more students to turn to the private market to finance their loans. That will protect U.S. taxpayers while curtailing runaway tuition prices.