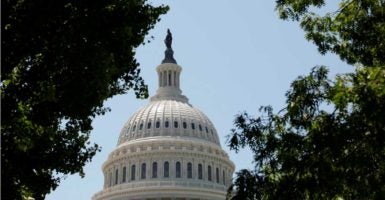 A criminal suspect in an investigation into a major security breach on the House of Representatives computer network has abruptly left the country and gone to Pakistan, where her family has significant assets and VIP-level protection, a relative and others told The Daily Caller News Foundation’s Investigative Group.

Hina Alvi, her husband Imran Awan, and his brothers Abid and Jamal were highly paid shared IT administrators working for multiple House Democrats until their access to congressional IT systems was terminated Feb. 2 as a result of the investigation. Capitol Police confirmed the investigation is ongoing, but no arrests have been reported in the case.

The Awans are “accused of stealing equipment from members’ offices without their knowledge and committing serious, potentially illegal, violations on the House IT network,” according to Politico.

Many of the Democrats who employed the Awans are members of the House Committee on Homeland Security, the Committee on Foreign Affairs, and the Permanent Select Committee on Intelligence. (A list of potentially compromised members is listed below.)

Their positions gave them access to members’ emails and confidential files. In addition, Imran was given the password for an iPad used by then-Democratic National Committee Chairwoman Debbie Wasserman Schultz, a Florida Democrat.

Since the investigation became public, the Awans have abruptly moved from longtime homes in Lorton and Springfield, Virginia.

Imran and Hina recently withdrew their children from their schools, according to members of the Holly Elementary and Lorton Station Middle school communities. Multiple people said Hina told them she was headed to Pakistan where the family has significant property.

Real estate records show Hina listed both the Lorton house and an apartment she owns for sale.

“I came to know from one of their relatives that Hina Alvi and her daughters are moved to Pakistan, Hina Alvi saying, ‘We have moved here in Pakistan permanently,’” the Awans’ stepmother, Samina Gilani, told The Daily Caller News Foundation.

Two other sources close to the family, who requested anonymity because they believe it is a “national security issue,” also said that Hina has gone to Pakistan.

Gilani said in court documents the Awan brothers have convinced Pakistani officials that they are VIPs and travel the country with a police motorcade—an assertion that seemingly gives them a major incentive to seek protection there, as well as raising questions about how the computer jockeys obtained that status.

Other court documents and multiple people involved in various financial disputes with Imran told The Daily Caller News Foundation that he was quick to represent himself as “from the U.S. Congress” in personal matters.

The family received more than $4 million in congressional pay, yet their lifestyles in the U.S. were not overly luxurious. Gilani said significant assets were stored in Pakistan.

When Imran and Hina moved out of their 3,200-square-foot home in Lorton, Imran told a neighbor he was moving into a home his father, who died Jan. 16, previously occupied.

“They lived there nine years,” the neighbor told The Daily Caller News Foundation. “I saw a moving truck a month ago, and he said he was moving to his dad’s house.”

Gilani said Abid moved into their deceased father’s home with his wife and kids, and Imran moved in as well but without his family.

A third family also lives in the 2,400-square-foot house, further indicating that Imran’s wife and kids are unlikely to be joining him. A female African immigrant at Shah’s house said she began renting a portion of the house in April with her numerous children.

That Springfield home is where Gilani, the stepmother, lived with the Awans’ father until his death. She fled after the brothers threatened to have her relatives in Pakistan kidnapped if she didn’t cooperate in a financial scheme, she told The Daily Caller News Foundation, echoing statements made in court documents.

A large U.S. House of Representatives seal is now displayed prominently on a first-floor window of the house.

Imran, who has worked for Wasserman Schultz since 2005, “boasted he had many contacts in USA and Pakistan also. He also said that if [I called even] the whole United States police on them,” he would not face consequences, Gilani told The Daily Caller News Foundation. “Imran Awan threatened that he is very powerful” and would use that power to have people kidnapped in Pakistan, she said in court documents.

Tenants of one property Hina owns said she has been unable to pick up rent recently and has not returned calls.

“All contact with her turned off,” the tenant said. “The switch off [to dealing with Imran instead] was odd.”

Imran ordered the renters not to cooperate with law enforcement, the renter said, adding that he told him to begin making out rent in the form of a blank check and giving it to a realtor.

A spokesman for the Capitol Police declined to comment for this story.