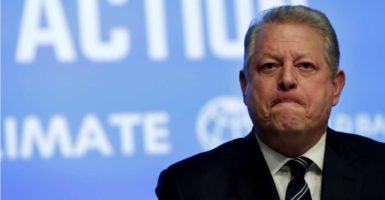 Former Vice President Al Gore praised the Paris climate deal when it was first announced in 2015, calling it “a bold and historic agreement.” (Photo: Yuri Gripas/Reuters/Newscom)

Gore called Trump Tuesday morning to discuss the Paris Agreement that the Obama administration joined in 2016, the source told Axios. “Mr. Gore made the case for why the U.S. should stay in the agreement and meet our commitments,” a source close to Gore said.

Gore praised the Paris Agreement when it was first announced in 2015, calling it “a bold and historic agreement.”

The agreement requires countries to voluntarily submit plans to cut greenhouse gas emissions, and those plans are supposed to be ratcheted up every five years. White House officials are split on whether or not the U.S. should remain in the agreement. Ivanka Trump and Jared Kushner favor staying, while chief strategist Steve Bannon favors keeping the president’s pledge to withdraw.

Ivanka Trump and Kushner have been backed by State Department career staff and Secretary of State Rex Tillerson. Multinational corporations from Starbucks to Exxon Mobil Corp. favor staying in Paris as well. Some Republicans have argued the U.S. can stay in the Paris Agreement with a weakened pledge to cut emissions. That argument has been supported by former Obama administration climate diplomats who have an interest in not seeing their work thrown out.

Conservative groups largely oppose staying in the Paris Agreement, arguing it could derail Donald Trump’s effort to cut back Obama-era climate policies. Conservatives also argue Paris should have been treated as a treaty and sent to the Senate for ratification.

“This treaty is designed to expand every government’s control over private energy-related capital,” said Marlo Lewis, a senior fellow at the libertarian Competitive Enterprise Institute.

“There is no way on earth an executive can reorganize the economy for the next 35 years,” said Lewis, who co-authored a paper that laid out arguments against staying in the Paris Agreement.

Trump promised to “cancel” the Paris Agreement while on the campaign trail, and has issued executive orders to rescind Obama administration policies meant to meet the former president’s plan to cut emissions.

President Barack Obama pledged to cut U.S. greenhouse gas emissions 26 to 28 percent by 2025. It’s unlikely the U.S. will even come close to meeting this goal if the Trump administration successfully rolls back Obama-era policies.

“This is not the first time he’s been in touch with the president and others in the administration about this issue,” the source told Axios. The two met in Trump Tower in December, and Gore disclosed in January the two were still in contact.

But is this an indication they’ve spoken more than twice since the election? Gore told The Washington Post in March “there is a realistic chance” Trump will stay party to the Paris Agreement.