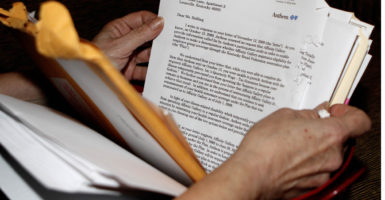 Insurance companies like Anthem are beginning to submit their rate requests for 2018 as congressional Republicans hash out their plan to repeal and replace Obamacare. In Connecticut, Anthem requested an average rate increase of 34 percent for 2018. (Photo: John Sommers II/Reuters/Newscom)

Consumers in at least two states face the prospect of double-digit increases in health insurance rates next year, as insurers attempt to price premiums amid uncertainty, including from Congress and President Donald Trump on the fate of Obamacare.

Also driving rate increases is the fact that the millions of Americans enrolled on Obamacare’s exchanges are sicker than the general population.

Insurance companies selling plans in Maryland and Connecticut have submitted their rate requests for 2018, as other insurers decide whether they’ll continue to offer coverage on Obamacare’s state-run and federal exchanges.

Already, Tennessee and Iowa have seen an exodus of major insurers. Consumers in parts of those states are in jeopardy of having no insurers to choose from on the exchange next year.

Humana announced in February that it no longer would sell Obamacare coverage in Tennessee, leaving residents of 16 counties in the eastern part of the state at risk of having no plans available to them.

But BlueCross BlueShield of Tennessee stepped in Tuesday, notifying the state’s insurance commissioner in a letter that it would sell coverage on the Obamacare exchange in those areas.

That coverage, though, may come with a steep price, the insurer warned.

“Given the potential negative effects of federal legislation and/or regulatory changes, we believe it will be necessary to price-in those downside risks, even at the prospect of a higher-than-average margin for the short term, or until stability can be achieved,” J.D. Hickey, president of BlueCross BlueShield of Tennessee, wrote.

In Iowa, Wellmark Blue Cross and Blue Shield and Aetna already said this year they no longer would sell plans in the individual market next year. That leaves just one insurer, Medica, as the only choice for Iowans living in 94 of the state’s 99 counties.

But Medica indicated last week that it would leave Iowa’s individual insurance market.

“Without swift action by the state or Congress to provide stability to Iowa’s individual insurance market, Medica will not be able to serve the citizens of Iowa in the manner and breadth that we do today,” the company said in a statement to The Des Moines Register.

Alongside potential exits from Obamacare’s exchanges, insurers in Maryland, Connecticut, and Virginia have begun to submit proposed premium increases for 2018.

Chris Sloan, a senior manager at Avalere, stressed that the figures coming from insurers are only proposed rates, and those rates typically decrease as insurance companies negotiate with state insurance departments and their commissioners.

Still, the preliminary figures from insurance companies indicate that uncertainty about the future of the health insurance market, and the enrollment population from years past, could lead to double-digit premium increases next year.

“This is a market that continues to have underlying issues with the risk,” Sloan told The Daily Signal. “Last year, a lot of people looked at 2017 as a market correction, which is why we had such big increases [in premiums], but then going into 2018 and nothing has changed in most of these markets.”

In Connecticut, just two insurers will sell health coverage on Obamacare’s exchange next year, according to the state.

In documents filed with the state, ConnectiCare said that despite “uncertainties” in the market, the company based its pricing on “weakened” enforcement of Obamacare’s individual mandate and continuation of cost-sharing reduction payments, which are taxpayer-funded subsidies that lower the cost of deductibles and copayments for exchange customers.

Anthem also attributed its request for a 34 percent rate increase to the continuation of the subsidies that lessen the amount low-income Americans pay in deductibles and copayments. But the company also warned it has continued to enroll patients who are sicker and require more expensive care.

There, CareFirst BlueCross BlueShield asked to raise rates by more than 50 percent.

“What we’re seeing is greater sickness levels,” Chet Burrell, CareFirst’s chief executive, told The Washington Post. “The pool of beneficiaries is becoming sicker, in part because healthier people are not coming in at the same level we hoped.”

Cigna and Evergreen Health asked to raise rates by an average of 37 percent and 28 percent, respectively.

Maryland reminded consumers, though, that the requests from insurers are preliminary.

“It’s important to remember that these rates are what companies have requested and not necessarily what will be approved,” Insurance Commissioner Al Redmer said. “There will be a thorough review of all the filings. As in years past, we may require changes.”

In addition to the continuation of subsidies to reduce deductibles and copayments, some insurers attributed their requested rate hikes to the federal government’s weakened enforcement of the Obamacare mandate that all individuals have health insurance.

The health care bill passed by House Republicans last week eliminates the mandate altogether. And earlier this year, the IRS signaled it would continue accepting tax returns from taxpayers who didn’t indicate whether they had insurance for 2016.

But Sloan, of Avalere, said there wasn’t necessarily a significant shift in enforcement of the individual mandate from the Obama administration to the Trump administration.

Where Sloan does agree with insurers, though, is in the uncertainties looming as companies plot their rates for 2018.

“What [insurers] may have gained in understanding the exchange population, they’re losing in uncertainty of what the market will look like,” he said.

Those uncertainties include whether Trump will continue funding—and whether Congress will appropriate the money for—Obamacare’s cost-sharing subsidies, and how the House GOP’s health care bill will affect the insurance market.

The House-passed bill to repeal parts of Obamacare is called the American Health Care Act, or AHCA. Republican leaders in the Senate have said they will draft their own bill in coming weeks.

“With Congress, obviously if there was certainty on what the market will look like when talking about the AHCA, that would help,” Sloan said. “It would help if they committed or de-committed either way to funding or not funding the cost-sharing reductions.”

Still, the potential for double-digit rate hikes has provided fodder for congressional Republicans and the Trump administration, as both work to fulfill a campaign promise of repealing and replacing Obamacare.

“Last year alone, 83 insurers left the Obamacare marketplace and Americans living in one-third of our nation’s counties had only one choice for coverage,” Alleigh Marre, spokeswoman for the Department of Health and Human Services, said in an email to The Daily Signal. “The fact remains, insurers are fleeing because the law is fundamentally flawed.”

In an interview Tuesday on “Fox & Friends,” House Speaker Paul Ryan pointed to the rate hike proposals in Maryland, as well as Medica’s decision to leave Iowa, as reasons why Obamacare has to be repealed.