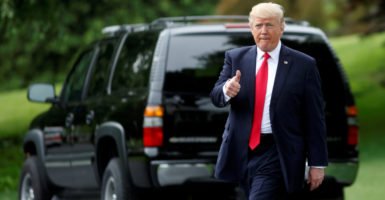 President Donald Trump has yet to say whether he will continue to fund Obamacare's cost-sharing reductions. (Photo: Yuri Gripas/Reuters/Newscom)

While Republicans and Democrats negotiated a government spending bill this week, another form of financial assistance that aims to help low-income Americans under Obamacare has been at the center of a debate involving insurance companies, consumers, and President Donald Trump.

These subsidies aren’t the tax credits implemented under the health care law, which lower the cost of premiums for eligible consumers, but are called cost-sharing reductions.

They’ve been the subject of much scrutiny lately, and a source of concern for insurance companies, congressional Democrats, doctors, hospitals, and the U.S. Chamber of Commerce.

So what are the cost-sharing reductions, how do they work, and why have they been thrust to the center of debate?

What Are the Cost-Sharing Reductions?

The cost-sharing reductions are subsidies designed to reduce out-of-pocket costs for low-income patients who purchase silver-level plans through Obamacare’s exchanges. The subsidies are only available to marketplace customers with an income between 100 percent and 250 percent of the federal poverty line ($12,000 to $30,000 for an individual).

In 2017, 7 million people—58 percent of marketplace enrollees—qualified for cost-sharing reductions, according to the Department of Health and Human Services.

How Do the Cost-Sharing Reductions Work?

While Obamacare’s tax credits and cost-sharing reductions are both intended to help lower the cost of coverage for low-income Americans, both serve different functions.

The tax credits lower the cost of premiums. But the government pays cost-sharing reductions directly to insurers.

In 2016, the government reimbursed insurers roughly $7 billion for cost-sharing reductions.

Why Are They in the News?

The cost-sharing reductions were the subject of much scrutiny in 2014, and now they’re back in the news again.

In 2014, the Republican-led House of Representatives filed a lawsuit against the Department of Health and Human Services, then led by Secretary Sylvia Mathews Burwell, over the subsidies.

In 2016, a federal district court judge in the District of Columbia sided with House Republicans and ruled that because Congress never appropriated money for the cost-sharing reductions, the Obama administration violated the Constitution.

President Barack Obama’s Department of Justice quickly appealed, and the judge’s order has been halted since then.

Now, the Trump administration has to decide whether it will continue the Obama administration’s fight, and the next court date is scheduled for May 22.

What Does the Trump Administration Want to Do?

At this stage, no one is entirely sure what Trump and his officials plan to do about the cost-sharing reductions.

Both the White House and the Department of Health and Human Services, now led by Secretary Tom Price, have sent mixed signals on whether they intend to continue funding the subsidies.

In a statement to The New York Times last month, the Department of Health and Human Services said the agency would continue to make payments to insurance companies.

But Trump floated the idea of using the cost-sharing reductions as leverage to bring Democrats to the negotiating table over a bill replacing Obamacare.

“Obamacare is dead next month if it doesn’t get that money,” Trump said of the subsidies in an interview with The Wall Street Journal last month. “I haven’t made my viewpoint clear yet. I don’t want people to get hurt … What I think should happen and will is the Democrats will start calling me and negotiating.”

Even more recently, though, White House budget director Mick Mulvaney told reporters Tuesday the administration hadn’t yet decided whether it will make cost-sharing reduction payments for May.

What Options Does Trump Have?

The Trump administration could drop the Obama administration’s lawsuit, and the Department of Health and Human Services would stop making payments to insurers.

But if the White House decided to continue funding the subsidies, it could move forward with the lawsuit that originated with the Obama administration.

Trump could also urge Congress to appropriate the money in future appropriations bills.

Democrats pushed the president and congressional Republicans to allocate money for cost-sharing reductions in a stopgap government spending bill that passed Congress this week. But money for the subsidies was ultimately left out of the legislation.

That spending bill keeps the government running until September.

While it remains unclear how the Trump administration wants to proceed—and whether Congress will appropriate money for cost-sharing reductions—the subsidies could be eliminated entirely.

What Happens If the Cost-Sharing Reductions Stop?

If the Trump administration decided to halt subsidies, insurance companies would lose the money they’re reimbursed for offering reduced deductibles, copays, and out-of-pocket limits to consumers.

To compensate for the lost money, insurers could raise premiums for all of their customers. The Kaiser Family Foundation estimates that if that were to happen, health insurance premiums would increase an average of 19 percent.

Insurance companies could also decide to leave the marketplace by canceling contracts with state and federal regulators, and end coverage for consumers mid-year, according to the Commonwealth Fund.

However, the Commonwealth Fund said leaving the marketplace would be complicated.

Where Do Republicans and Democrats Stand?

For Democrats, the answer to the question on what to do with the cost-sharing reductions is easy: They want Congress to appropriate the money to fund the subsidies.

They’re joined by a coalition of insurance companies, physicians, hospitals, and the U.S. Chamber of Commerce, which collectively sent a letter to congressional leaders last month urging them to fund the cost-sharing reductions.

Though the Republican-led Congress didn’t appropriate money for the subsidies in this week’s spending bill, top GOP lawmakers are also in favor of continuing the cost-sharing reductions.

Rep. Tom Cole, R-Okla., told The New York Times he believes Congress should provide the money to fund the subsidies.

He was joined by House Energy and Commerce Chairman Greg Walden, R-Ore., who said lawmakers had an obligation to insurers and consumers to make sure the government’s payments to insurance companies were made.

“We cannot leave them high and dry,” he told The New York Times.