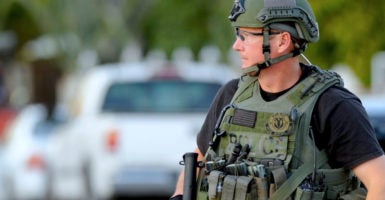 In contrast with the Obama administration, he had no hesitation defining precisely the root of the threat: Islamist terrorism—not vaguely phrased “violent extremism,” “workplace violence,” or “manmade contingencies.”

This definition of the threat also needs to come with a far more concise strategy to combat it. The shorthand for the Obama strategy was “CVE,” or “Countering Violent Extremism.”

Like the evasive title, this program failed. The United States continues to face terror attacks from radicalized individuals, such as last year’s Orlando nightclub massacre.

In a recent article for The National Interest, “Top 10 Ways to Make War on the ‘War of Ideas,’” The Heritage Foundation’s James Carafano writes that “the new team in Washington needs to right-size the effort, making it complementary with effective counterterrorism measures and U.S. strategy overseas.”

An 11th point that should be added is the importance of information and communication in defeating the enemy.

For that, the United States government has powerful tools—in particular, the civilian entities of U.S. International Broadcasting under the Broadcasting Board of Governors.

These broadcasters are legitimate and important tools of U.S. foreign policy, and have been ever since they were created in World War II.

The U.S. government has devoted millions of dollars over the last 15 years toward expanding these broadcast services to the Middle East and Afghanistan, with varying degrees of success.

Networks that came from these efforts include the Middle East Broadcasting Network (which consists of Radio Sawa and Al Hurra Television), Voice of America’s Persian News Network, Radio Free Afghanistan, and Radio Farda (for Iran) produced by Radio Liberty in Munich.

The Trump team must now create a comprehensive broadcasting strategy to reach and inform audiences who are trapped behind enemy lines, often by autocratic Islamist regimes. This should become part of a clear, focused, and revitalized counterterrorism strategy.