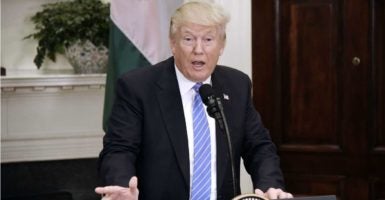 President Donald Trump will reportedly be celebrating the National Day of Prayer by signing an executive order to boost America’s first freedom.

Trump is meeting with religious leaders for a dinner at the White House Wednesday night and is expected to sign the executive order Thursday morning in a Rose Garden event marking the National Day of Prayer.

A draft for an executive order was leaked in February to The Nation, a liberal magazine. The leaked order would, among other things, allow the purchase of pro-life health insurance on Obamacare exchanges, and would broadly protect religious expression in all forms, not just the act of worship. Liberal groups immediately attacked the order, claiming it would discriminate against LGBT people and religious minorities.

An executive order to reverse previous trends would be welcome news, said Ryan T. Anderson, a senior research fellow with The Heritage Foundation.

“President Trump should make good on his campaign promise to protect religious liberty for all Americans,” Anderson told The Daily Signal. “The executive order is a good first step to make sure this administration doesn’t violate religious liberty.”

The Daily Signal reported last week that a religious liberty measure would be a priority for Trump going into his next 100 days. White House media affairs director Helen Aguirre Ferré said Trump wants a measure with “profound impact on religious liberty.”

“Keep your eyes open for religious liberty,” Ferré told The Daily Signal last Friday. “It’s going to be an issue. The president made a commitment about the Johnson [Amendment] and I think he’s going to keep that commitment.”

Asked if the order would go beyond the Johnson Amendment, which restricts what churches can say about politics, Ferré said, “Stay tuned.” The amendment was named after Democratic Sen. Lyndon Johnson, before he was president.

According to an Anderson commentary in The Daily Signal, if the executive order Thursday follows the leaked version from February, it would:

The order Trump is signing Thursday will reportedly be scaled back, but it’s unclear how much.

The order will send a message that Trump is willing to use the bully pulpit of his office to promote religious freedom, said Mat Staver, founder and chairman of Liberty Counsel, a religious liberty legal group.

“Candidate Trump promised to be a champion of religious freedom, and this executive order has been long anticipated,” Staver told The Daily Signal in a phone interview.

Staver said he doesn’t anticipate the action will be limited to the Johnson Amendment.

Liberal groups Wednesday strongly criticized the plans for an executive order, before seeing it, though referring to the contents of the leaked order from February.

A White House spokesperson declined to comment Wednesday, saying, “we don’t get ahead of executive orders until they are announced.”

On its website, Americans United for Separation of Church and State said:

The harm [the executive order] could cause to real people is hard to overstate. It reads like a wish list put together by Vice President Mike Pence and his allies, who are among the forces leading the charge to discriminate against LGBTQ people and women under the guise of religious freedom. We’ve got to act so that Trump doesn’t grant their wishes.

“There is no religious freedom crisis in America today, but there is a crisis of hate and discrimination,” said Chad Griffin, president of the Human Rights Campaign, in a public statement. “At a time when two-thirds of all LGBTQ people report having experienced discrimination, Donald Trump is making the problem worse by giving legal cover to perpetrators.”

President Barack Obama’s two terms in office were filled with religious freedom controversies, often stemming from rules in the Affordable Care Act, better known as Obamacare. The health law required businesses to pay for the cost of contraception and abortion-inducing drugs that might violate an employer’s religious beliefs.