Net Neutrality Is On the Outs. This Bill Would Repeal It for Good. 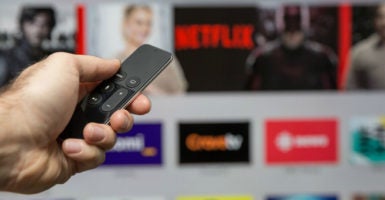 The Restoring Internet Freedom Act would nullify the FCC's 2015 order that instituted net neutrality rules, and would prevent a similar order in the future. (Photo: iStock Photos)

They want to be able to watch, listen, and play any video whenever they want, wherever they want, and for as long as they want. And they don’t want to pay a fortune for the privilege to do so.

For most of the history of the internet, companies have been free to find innovative new ways to meet America’s insatiable demand for data.

But progressive activists have never been comfortable with the unregulated nature of the internet. They have always wanted government bureaucrats to have more control over how the internet is managed.

Those regulations were immediately challenged in court, and the FCC lost that court battle in 2014. But in 2015 they issued a new “Open Internet Order,” which had an immediate impact on the market.

That same year, T-Mobile introduced a “Binge On” plan, which offered customers unlimited data on some video options including Netflix, HBO, and Hulu.

While then-FCC Chairman Tom Wheeler called the “Binge On” plan “innovative,” progressive activists thought the plan was a clear violation of the brand new net neutrality regulations and lobbied the FCC to kill the plan.

But before the FCC could act, T-Mobile ended Binge On and created a new plan called “Uncarrier,” which allows customers to download all the data they want, but charges an extra $25 to upgrade the quality of video from 480p to HD quality.

Fortunately, T-Mobile no longer has to worry about progressive activists dictating how they engineer their wireless system. This Wednesday, new FCC Chairman Ajit Pai announced that he would be repealing the 2015 Open Internet Order.

“Instead, we need rules that focus on growth and infrastructure investment, rules that expand high-speed internet access everywhere and give Americans more online choice, faster speeds, and more innovation.”

That is why I introduced the Restoring Internet Freedom Act this week—a bill that would nullify the FCC’s 2015 Open Internet Order and prohibit the FCC from issuing a similar rule in the future.

Congress should be the one setting telecommunications policy, not federal bureaucrats, and I look forward to engaging in this debate in the months ahead.