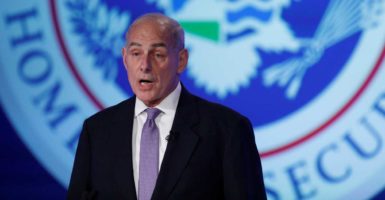 Secretary of Homeland Security John Kelly speaks at an event titled "Home and Away: DHS and the Threats to America" at George Washington University. (Photo: Aaron P. Bernstein/Reuters/Newscom)

Homeland Security Secretary John Kelly gave a speech at George Washington University Tuesday outlining where he will be taking the department. This was the first address from a Cabinet secretary detailing how they plan to roll up their sleeves and make their piece of government work better.

It’s not surprising that taking the initiative to map the way forward is a task where Kelly takes the lead; that’s what leaders do. After a dozen or so weeks on the job, it is looking pretty clear that he is the right leader for the department. Here are the top five reasons why.

No one is more mission-oriented than a Marine and DHS is a department with a serious mission. Running it calls for a plain-spoken, nonpartisan leader who puts the security of Americans above the political squabbles of the day.

After the furor over the executive orders restricting travel from several Middle East countries, it required a thick-skinned leader to turn around and limit carry-on electronic devices from flights in airports in that part of the world. Kelly did it. He acted because there was a legitimate security concern. He was sending a message.

Doing the right thing—politics aside—is the standard at Kelly’s Department of Homeland Security.

2.) Putting Priorities First. DHS is a department that does a lot of things, but Kelly is emphasizing the top three tasks for it—combating transnational Islamist terrorism, battling the criminal cartels that are undermining security at the border, and enhancing cybersecurity.

These are the three threats that can stop the heartbeat of America over which the department has the clearest responsibilities. Bringing that kind of mission focus to a big, sprawling department is important.

3.) Putting People First. It is no secret that DHS has some of the worst morale in the federal government. What makes addressing morale a big problem is that there is not a single issue in the department. Each agency in DHS from the Secret Service to Customs and Border Protection has a different set of challenges. Kelly is committed to addressing them.

4.) Being a Good Neighbor. In Latin America, they call him “Saint Kelly.” No Kidding. As the commander of the U.S. military Southern Command before he retired, Kelly earned a reputation as an honest broker, a good friend, and a straight shooter. As the DHS secretary he will bring that experience, expertise, and reputation to the task of partnering with countries to the south in addressing common security issues.

5.) Playing for the Team. It is already clear that Kelly has established a strong working relationship with Attorney General Jeff Sessions, Secretary of Defense James Mattis, and Secretary of State Rex Tillerson, heads of key departments who have to work together to secure America’s place in the word.

Further, he enjoys the confidence and support of the White House—and for the right reason. The president trusts in Kelly’s judgment and leadership.

It’s been a decade and a half since the terrorist attack on 9/11. Many Americans have forgotten why Congress established the Department of Homeland Security—not Kelly. The department has a significant role to play in keeping America free, safe, and prosperous. He seems committed to ensuring that DHS meets its mandate—turning a troubled department into Kelly’s heroes.