‘Not at This Time’: DHS Chief Says Nationwide Lockdown Not Happening Yet 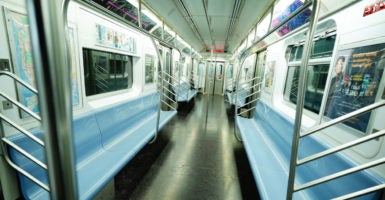 Acting Homeland Security Secretary Chad Wolf said Sunday that there would be no countrywide lockdown order over the coronavirus pandemic—at least not at this time.

During an appearance on Fox Business Channel, Wolf spoke about the Trump administration’s actions to curb the spread of COVID-19. Although some hard-hit states have executed lockdown orders, such as California and New Jersey, the White House does not yet think it’s necessary to put the entire U.S. under a lockdown.

“Not at this time,” the DHS chief said when host Maria Bartiromo asked if the president was contemplating a full shutdown of the country.

New York and California, two highly populated states that are dealing with a massive number of COVID-19 cases, have taken aggressive measures to try to limit the spread of the disease. Wolf said the federal government is working with state and local leaders where COVID-19 is more rampant, and is encouraging them to take those sort of initiatives where necessary.

Beginning at 8 p.m. Sunday, the entire state of New York was to be put under a stay-at-home order. Wolf was asked why such an order is effective in some states, but not the entire U.S.

“Again, I think we’re focusing on those states and those localities that again have widespread community transmission,” Wolf said. “So, New York, California, Washington, and other parts of the country that we’re seeing cases spike … those governors are obviously looking at those numbers closely, and they’re in touch with the [Centers for Disease Control and Prevention] and [the Department of Health and Human Services], and they are in touch with the task force.”

Wolf said the federal government is constantly reevaluating  its assessment as the crisis continues.

“But again, we continue to evaluate this on a day-by-day, week-by-week basis,” he said.

As of Sunday morning, more than 24,300 people across the country have tested positive for the coronavirus and at least 376 have died.