Labor Group Declares Itself a ‘Sanctuary Union’ for Illegal Immigrants 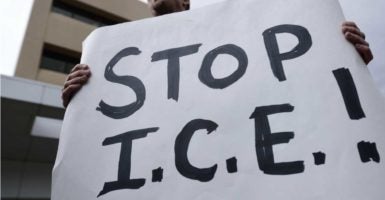 A California labor group has announced it will become a "sanctuary union" for illegal immigrants. (Photo: Alex Milan Tracy/Sipa USA/Newscom)

A California-based labor union representing more than 11,000 health care workers declared itself a “sanctuary union” for its members and their relatives “at risk of deportation.”

“As President Donald Trump was preparing to bar Syrian refugees and bolster his deportation force, the National Union of Healthcare Workers was convening members across California to discuss how best to protect each other,” Porfirio Quintano, a member of the the union’s executive board, said in an op-ed that appeared in labor publications over the past week.

“We emerged with a consensus that we would declare ourselves a ‘sanctuary union’ and that protecting our members from Trump’s deportation dragnet would be as high a priority as defending them from management retaliation,” continued Quintano, one of 20 members elected to the union’s executive board.

The National Union of Healthcare Workers is partnering with an immigration law firm in the San Francisco Bay Area to represent members and their relatives that are at risk of deportation, according to its website. The union is also educating its members on ways to hinder U.S. federal agents from determining their immigration status.

The group of California-based hospital and nursing home workers grew sour with SEIU officials in Washington, D.C., who they accused of “making backroom deals with health care corporations that gave away California workers’ rights.”

The union represents thousands of health care workers in the Bay Area, including San Francisco, a regular target of the president’s fervent opposition to immigration policies in sanctuary cities. Trump signed an executive order in January that said he would withhold federal grants from jurisdictions that violated federal immigration law.

Quintano, who illegally entered the U.S. when he crossed the southern border into California 23 years ago, said he doesn’t take “standing up to the state” lightly. He was granted political asylum soon after arriving in the U.S., and later received full American citizenship.

“I know I’m one of the lucky ones,” Quintano said.

Nine out of 10 of his union co-workers at the California Pacific Medical Center in San Francisco are foreign-born, the Honduras-born hospital worker said.

“Who can my co-workers count on if ICE agents come looking for them or their family members?” Quintano writes in his op-ed, before answering: “Our union, thankfully.”

He also said the union had another goal, which was to turn its workplaces into sanctuaries as well.

“We are encouraging the hospitals, clinics, and nursing homes where we work to adopt policies that protect patients and caregivers alike,” Quintano said.

“By declaring itself a sanctuary, our union isn’t just making us feel safer, it’s giving members a safe space to discuss what’s happening in our country and help make a difference.”