How Free Trade and Economic Freedom Help the Poor 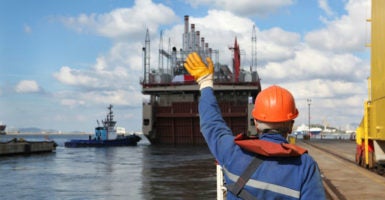 The Pew Research Center has shown that while global trade increased nearly 10 percent between 2001 and 2011, the number of people in poverty decreased by 14 percent. (Photo: iStock Photos)

Michael Marn is a member of the Young Leader's Program at The Heritage Foundation.

They say free trade creates a wage gap between low- and high-income earners, and constructs barriers that make it increasingly difficult for the less fortunate to climb the economic ladder.

But recent data from The Heritage Foundation shows that this simply is not true.

The Heritage Foundation’s 2017 Index of Economic Freedom shows that removing tariffs and other trade barriers leads to a number of tremendous benefits.

The creation of freer trading conditions establishes a mutually beneficial relationship between both parties—people voluntarily trade with each other only if it is in their own interest.

As a result, those who have greater opportunity to participate in the global exchange of goods and services find themselves with increased prosperity and diminished poverty. According to the Pew Research Center, from 2001 to 2011, the number of “poor” individuals—those living on less than $2 a day—decreased by 14 percent globally.

During the same period, world trade (as a percentage of gross domestic product) increased by over 9 percent, from 51.5 percent up to 60.7 percent.

This strong correlation between trade freedom and reductions in poverty seems to refute the narrative we often hear. Rather than hurting the poor, the removal of international trade barriers allows millions of  people to escape poverty.

A recent report from the World Bank Group gives further support to this correlation. Based on the most recent estimates, while 35 percent of the world’s population lived on less than $1.90 a day in the year 1990, that percentage had dropped to 12.4 percent in 2012.

The percentage dropped even further in the year 2013 to 10.7 percent. For a practical example of how trade barriers hurt the American poor, consider U.S. import restraints on food and clothing.

These inflict substantial financial burdens on the poor because they drive up the price of these goods, which make up a larger proportion of poor people’s incomes than of wealthy people’s incomes.

>>> For additional information on policies that burden the poor, and potential solutions, watch the full summit: “Big Government Policies that Hurt the Poor and How to Address Them.”

Reducing or getting rid of tariffs will clearly reduce these prices for consumers, and will relieve a disproportionate amount of pressure from the poor.

As James M. Roberts and Ryan Olson of The Heritage Foundation report, countries with higher levels of economic freedom have citizens who enjoy a longer life expectancy, take better care of the environment, and spend more time in school—an important factor for poverty reduction.

On trade and economic freedom, the data speak loud and clear. In order to further reduce global poverty, governments should promote economic freedom and allow their citizens to participate in and enjoy the benefits of free trade.