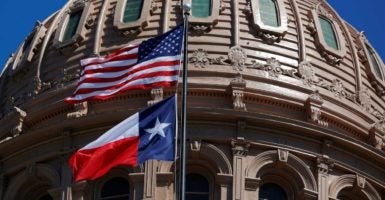 A group of conservative Texans has penned a letter voicing support for the Freedom Caucus and has asked President Trump to make Obamacare repeal a priority. (Photo: Brian Snyder /Reuters/Newscom)

“For seven long years, we have been suffering from the rising costs of Obamacare.”

That’s the opening sentence of the letter a Texas grassroots coalition has sent to President Donald Trump this week, in the wake of the House health care bill’s failure to pass and Trump’s criticisms of the House Freedom Caucus, which was opposed to aspects of the legislation.

The letter was signed by 92 conservative Texans, including JoAnn Fleming, executive director of Grassroots America; Dana Hodges, state director of Concerned Women for America; and many other Texas GOP committee members and local tea party organizers.

This is similar to a letter sent by Ohio conservatives last week. Both coalitions were critical of Trump’s recent actions regarding the House Freedom Caucus in the health care debate, yet remained steadfast in their support of his presidency. The Texas coalition reaffirmed its support for Trump, writing:

We, the House Freedom Caucus, and Senate conservatives, are your greatest allies should you sincerely aim to end the decades of Big Government cronyism in D.C. Mr. President, Texas grassroots conservatives are praying for your success as you work to rebuild our nation. Let’s do it together.

However, the letter called on Trump to stop attacking the House Freedom Caucus.

“[W]e urge you to work with, and ally with, the House Freedom Caucus, not actively attack it, and undermine it,” the letter said.

Trump criticized the House Freedom Caucus on Twitter after the health care bill failed to pass:

“To our dismay, the ‘repeal and replace’ plan put forward by U.S. House Speaker Paul Ryan did nothing to address the core regulatory infrastructure of Obamacare,” the letter said.

Referring to the health care bill as “retain and reform” instead of “repeal and replace,” the group praised Freedom Caucus members for opposing the bill, writing that they had the “American people on their minds and in their hearts when they opposed the [American Health Care Act].”

The letter also held Trump accountable for one of his biggest campaign promises.

“Grassroots conservatives worked tirelessly to give Republicans the House, the Senate, and you, sir, the presidency,” the letter said. “They did so based upon several promises—a major promise being the full repeal of Obamacare.”

After the House health care bill stalled and failed to come up for a vote on March 24, Trump told reporters in a statement: “I think what will happen is Obamacare, unfortunately, will explode.”

The next day, Trump tweeted: “Obamacare will explode and we will all get together and piece together a great healthcare plan for THE PEOPLE. Do not worry!”