Ohio Conservatives to Trump: Work With Freedom Caucus Members, Not Against Them 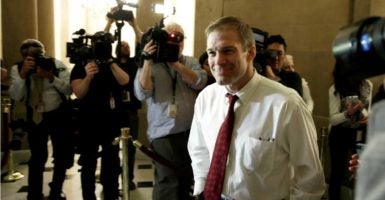 Hours after President Donald Trump attacked the Freedom Caucus and several of its members on Twitter, several prominent Ohio conservatives are speaking out in defense of the GOP lawmakers.

Ohio tea party members, state representatives, and other conservative leaders responded to Trump’s tweets with a letter to the White House asking the president to “work with members of the Freedom Caucus, not against them.”

The signers of the letter include Ann Becker, president of the Cincinnati Tea Party. As a Trump supporter, she told The Daily Signal she was “disappointed” when she read the president’s tweets Thursday.

In a morning tweet Thursday, Trump likened the conservative Freedom Caucus to Democrats, saying, “We must fight them.” He later singled out three conservative leaders, Reps. Mark Meadows of North Carolina, Jim Jordan of Ohio, and Raúl Labrador of Idaho.

If @RepMarkMeadows, @Jim_Jordan and @Raul_Labrador would get on board we would have both great healthcare and massive tax cuts & reform.

Becker said she hopes Trump will rethink his criticism after reading the letter from Ohio conservatives.

“This was a bad bill,” Becker said. “It was a blessing that the Freedom Caucus kept it from reaching his desk.”

Voicing her support for the Freedom Caucus, including her congressman, Rep. Warren Davidson of Ohio, Becker said, “We need to fully repeal Obamacare and start over with a replacement plan—with the Freedom Caucus in the lead.”

Here is the full text of the letter to Trump along with those who signed it:

We, the undersigned conservative leaders in the swing state of Ohio, voted for you and worked hard to bring others to the polls to elect you last November. We want to see you succeed in Making America Great Again! We appreciate much of what you have already done in the first few months of your administration.

However, we respectfully ask you to stand with our conservative heroes in the Freedom Caucus, along with other conservatives in the House and Senate. These patriots are working to keep the campaign promises that you — and they — made to us.

Please work with members of the Freedom Caucus, not against them, to ensure you are all successful in keeping your campaign promises and “draining the swamp.” Mr. President, we are praying for your success as you work to rebuild our nation.