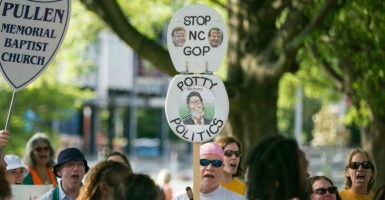 Liberals and conservatives are displeased with how North Carolina lawmakers chose to repeal the state's hotly contested bathroom law, the source of protests like this in 2016. (Photo: Al Drago/CQ Roll Call/Newscom)

A legislative compromise watering down North Carolina’s “bathroom law” leaves access to public bathrooms muddier than ever, conservative opponents of the change say, and it removes the standard of privacy espoused last year by state officials.

“They’ve taken away that baseline of privacy that ensured that [use of] every multi-occupancy restroom, locker room, and shower in the state’s public buildings would be based on a person’s biological sex,” Kellie Fiedorek, counsel at the Christian legal group Alliance Defending Freedom, told The Daily Signal in a phone interview Thursday.

This means, Fiedorek said, that a man won’t be arrested for entering a women’s restroom, unless someone decides to press charges.

“If a male wanted to use the females’ restroom, there’s nothing to really prevent him from doing that, unless someone finds him in there and they want to file a trespass action,” she said.

The deal, the work of Gov. Roy Cooper, a Democrat, and the Republican leaders of the state Legislature, repeals the bathroom law, also known as House Bill 2.

That law, praised by some and assailed by others, required that individuals use restrooms and locker rooms in schools, public universities, and other government buildings that correspond with their biological sex.

The main provision of the bill reads:

State agencies, boards, offices, departments, institutions, branches of government including the University of North Carolina and the North Carolina Community College System, and political subdivisions of the state, including local boards of education, are preempted from regulation of access to multiple occupancy restrooms, showers, or changing facilities, except in accordance with an act of the General Assembly.

Advocates for lesbian, gay, bisexual, and transgender Americans had labeled the law as hateful and encouraged businesses and tourists to boycott North Carolina as a result.

The state’s Republican governor, Pat McCrory, lost re-election to Cooper by a close margin in November, conceding four weeks later, after signing the bathroom bill into law in March 2016.

Cooper hailed the deal to repeal the law.

“l support the House Bill 2 repeal compromise,” Cooper said. “It’s not a perfect deal, but it repeals House Bill 2 and begins to repair our reputation.”

The bill prevents any local government from adopting or amending an existing law regulating employment practices and public accommodations until Dec. 1, 2020, Fiedorek noted.

>>>Liberals Claim Victory Over North Carolina Bathroom Law, but Not Everyone’s Buying It

“Compromise requires give and take from all sides, and we are pleased this proposal fully protects bathroom safety and privacy,” Berger and Moore said in a joint statement.

North Carolina’s brand and continued economic prosperity should not be beholden to the loudest voices on either the far left or the far right who don’t have our state’s best interests in mind. I’m glad that state lawmakers were able to reach a commonsense compromise to repeal House Bill 2.

>>>Commentary: The Truth About the Economic Impact of North Carolina’s ‘Bathroom Bill’

But Ryan T. Anderson, a senior research fellow at The Heritage Foundation, told The Daily Signal in an email that North Carolina lawmakers gave in to special interests.

This is a prime example of what I have called ‘cultural cronyism‘—when the left can’t win on an issue through normal political persuasion, they get progressive big businesses to use their outsized market share to make economic threats to pressure the government to do their bidding—at the expense of the common good.

Jackson tweeted his reason for opposing the measure:

To me this isn't about gay rights or transgender rights. It's about whether you get to kick people around for no good reason. And you don't.

McKissick called the measure a “heartless compromise” and said he “couldn’t support it as a matter of philosophy and principle.”

Please view the video below to hear why I could not support the HB2 compromise bill #ncga #hb2 #ncdemocratshttps://t.co/ZOPzJq0HZL

The organization also tweeted that lawmakers who supported the measure “betrayed” those who aren’t heterosexual:

Make no mistake: Each and every lawmaker who supported this bad #HB2 bill has betrayed the #LGBTQ community. https://t.co/SvuLtU88Yc