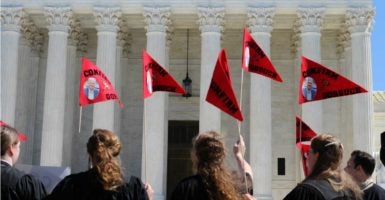 Despite the looming threat of a Democratic filibuster, a group of key Republican lawmakers from the Senate Judiciary Committee displayed confidence that Supreme Court nominee Neil Gorsuch will be confirmed during a press conference in the District of Columbia.

“The Democrats will not succeed in filibustering [Gorsuch],” Sen. Ted Cruz, R-Texas, said. “Judge Gorsuch should be confirmed to the Supreme Court and he will be confirmed.”

Graham said he was confident that Gorsuch would eventually be confirmed by the Senate.

“I’m here to tell you [Gorsuch] is going to be on the Supreme Court … it’s not a matter of when, but how,” Graham said.

Graham, who said there is “no better qualified person” than Gorsuch to sit on the Supreme Court, concluded by saying to his Democratic colleagues: “If you’d filibuster a judge like this, then it’s obvious that you’d filibuster anyone.”

Grassley was shocked by the Democrats’ filibuster threat, saying, “It leaves me very stunned why there’s this talk about a filibuster, because if he’s not qualified, then nobody is … it’s quite purely politics.”

Since a whip count has not been conducted yet, Grassley added that is he unsure if Republicans have enough votes to “go nuclear” and stop the Democrats’ filibuster.

“If Democrats make the choice to filibuster Judge Gorsuch, it will be a foolish choice … it will be a choice driven only by the political fear of incumbent Democrats that their angry political base would primary them,” said Cruz, as he talked over a group of shouting anti-Gorsuch protesters with People for the American Way.

A group of pro-Gorsuch demonstrators also gathered at the Supreme Court and, while dressed in judge attire, sang a number of songs in support of the nominee.

“Gorsuch is uniquely well qualified for the Supreme Court … he’s read every brief, every opinion, every case involving whatever dispute is in front of him,” Lee said.

In response to the claim from Sen. Dianne Feinstein that the judge has ruled on the side of large entities and not “the little guy,” Lee said a judge should ideally side with the law in the courtroom, not “emotionally compelling arguments.”

Leah Bressack, one of the SCOTUS nominee’s former law clerks, was also present at the press conference to advocate for Gorsuch. Bressack also spoke at his committee hearing.

“There’s no question about the judge’s independence and impartiality,” Bressack said. “The hearings have shown that he will not prejudge any cases that come before him. We know that he is a justice of who all Americans will be proud.”

Gorsuch has completed his Supreme Court hearings and awaits an April 7 confirmation vote. If all Republicans in the Senate vote for Gorsuch he will need eight additional votes from Democrats to avoid a filibuster.