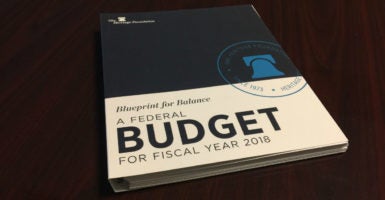 "Blueprint for Balance: A Federal Budget for Fiscal Year 2018" identifies over 100 policy proposals that would reduce federal spending by $87 billion if enacted. (Photo: The Daily Signal)

Balancing the budget without raising taxes and still maintaining strong national defense are the main goals in a new budget blueprint released by The Heritage Foundation Tuesday.

“We emphasize is that it’s possible to balance the budget without raising taxes and while strengthening our national defense, which we demonstrate in the product,” Romina Boccia, deputy director of the Thomas A. Roe Institute for Economic Policy Studies at The Heritage Foundation, told The Daily Signal in an interview.

“It is sort of like a ‘no excuses for Congress anymore’ [message] because we know that you can do it because we’ve done it,” Boccia said.

The “Blueprint for Balance: A Federal Budget for Fiscal Year 2018” highlights “over 160 different policy proposals that reduce nondefense discretionary spending by $87 billion in fiscal year 2018,” according to Rachel Greszler, a senior economic policy analyst at The Heritage Foundation.

The blueprint, according to Greszler, also suggests “reforms that would reduce spending by another $31 billion.”

Some of the programs that the blueprint suggests cutting in order to reduce government spending including the Corporation for Public Broadcasting, which would save $486 million in fiscal year 2018 as well as the National Endowments for the Arts and Humanities, which would save $308 million.

With the increase of media sources and broadcasting services, the 2018 “Blueprint for Balance” maintains that the Corporation for Public Broadcasting could flourish in the public sector and “make up lost funding by increasing revenues from corporate sponsors, foundations, and members.”

Federally funding the National Endowments for the Arts “is neither necessarily or prudent,” and the 2018 “Blueprint for Balance” suggests that federal funding of these programs aids in promoting “cultural cronyism.”

The “Blueprint for Balance,” according to Boccia, illustrates the amount of waste in the federal budget and how needless programs must be eliminated.

“I think that … this demonstrates [how] the federal government has grown tremendously in both size and scope and is now entangled in too many areas that are not proper federal priorities that should be handled either in the private sector or on the state and local level,” Boccia said.

Funding national defense should always be a top priority, according to Boccia, and that is why the 2018 “Blueprint for Balance” fully funds national defense while balancing the federal budget in seven years.

“The federal government truly has responsibility including national defense,” Boccia said. “As the government has grown and gotten involved in many other areas that they don’t really need to be involved in, they’ve also stretched themselves so thin that they have become ineffective at those things that they are supposed to be doing.”

Some of the tasks included in the 2018 “Blueprint for Balance” include repealing Obamacare and reforming Social Security to “ensure that seniors and individuals with disabilities are protected from poverty without burdening younger generations from excessive debt and taxation.”

The 2018 “Blueprint for Balance” would also incentivize marriage by reducing penalties in earned income tax credits, which would save the federal budget $15.8 million annually.

The 2018 blueprint also seeks to help veterans by ensuring that veteran benefits are allocated exclusively to them.

According to the 2018 “Blueprint for Balance,” “One out of every 10 [Veterans Affairs] patients is not a veteran, and the number of non-veterans using the VA’s health care services has increased faster in recent years than has the number of veteran patients.”

The blueprint also seeks to protect the religious freedom and religious conviction of citizens by ensuring “all existing pro-life policy riders that prevent federal funding from being entangled with provision, coverage, or advocacy of abortion, whether in the U.S. or abroad,” are respected.

According to a recent op-ed by Boccia, President Donald Trump’s skinny budget, or budget proposal, reflects some of the recommendations in The Heritage Foundation’s “Blueprint for Balance,” such as increasing military spending and reducing nondefense discretionary programs.

The purpose of the  2018 “Blueprint for Balance” is to provide a way for lawmakers to “refocus and resize” the federal government and Boccia says if this blueprint is heeded, government spending will be more efficient.