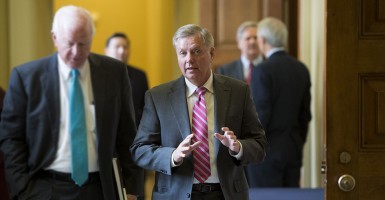 Sen. Lindsey Graham, R-S.C.,  called for the creation of a Senate Select Committee on Benghazi in an interview this week on Hugh Hewitt’s radio show.

Graham has been one of the most persistent critics of the Obama administration’s handling of Benghazi since day one. The administration was under threat from Graham to hold up the confirmation of key national security appointments when administration officials finally produced some of its officials for questioning by the Senate Intelligence Committee.

Graham complimented the leadership of the House of Representatives Select Committee on Benghazi for getting off to a good start, which the Senate could add to.  “Trey Gowdy and Elijah Cummings have done a good job,” he said, referring to the two House members who head the House committee. “What I would envision is a select committee being formed in the Senate of members from the appropriate committees instead of a stovepipe approach.”

While the Senate Oversight Committee on Government Affairs under the leadership of Sen. Ron Johnson,R-Wis., another strong advocate of investigating Benghazi, is well positioned to re-energize the Benghazi investigation, select committees in the House and Senate working together would be a formidable tools for finally getting at the truth.

Graham says he has a slew of questions still to ask and want to be able to subpoena elusive members of the administration, like National Security Advisor Susan Rice (then U.N. ambassador) about her ill-fated media appearances to explain what happened in Benghazi on Sept. 16, 2012. Rice was sent out by the administration to do the job for then-Secretary of State Hillary Clinton, and the false story Rice served up to the American people about how the attack went down soon became a problem for the administration.

“I’m dying to ask some questions of people who have never been interviewed before,” he said. “She’s said on TV shows the level of security at the consulate was strong, substantial and significant.” According to the Accountability Review Boardreport, security in Benghazi was anything but.

Graham said he would like to ask Rice: “Who told you that? That’s not part of the talking points, and nothing could have been further from the truth. Where did you get that information? Or did you just make it up?”

Graham described the investigation of Benghazi as one of the “winners” in the mid-term election, which gave the Republicans control of the next Congress.  It is not hard to see why given the resistance displayed by the outgoing Senate leadership.  Yet, understanding the State Department policies and failings that led to Benghazi and the role of the White House in keeping the truth about the terrorist attack from the American people should be a matter of bipartisan interest.