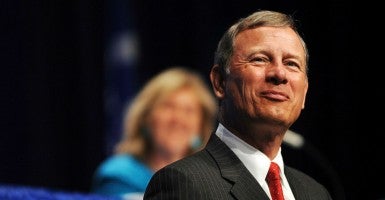 It’s a terrible, horrible, no good, very bad day for conservatives who pinned their hopes of blocking Obamacare on the Supreme Court.

Today’s decision allowing the Obama administration to extend subsidies to the federally-run health care exchange will only encourage more bad behavior on the part of our unbound executive.

In a 6-3 decision written by Chief Justice John Roberts, the court sided with the administration to hold that the text of Obamacare, which on its face limits the availability of subsidies to individuals who purchase insurance through a state-run exchange, includes the availability of subsidies for those who purchase insurance through the federal exchange. Though it acknowledged that the challengers’ arguments based on the plain meaning of the text were “strong,” the majority concluded that a “fair reading of the legislation demands a fair understanding of the legislative plan.”

According to the court that plan included three key reforms: guaranteed issue and community ratings requirements, an individual mandate to purchase insurance, and the availability of subsidies for individuals at a certain income level. In the majority’s view, the three reforms are so “closely intertwined” that one could not work without the others, and Congress could not have intended to limit the subsidies’ availability only to those states that set up their own exchange.

With this broader structure in mind, the majority eschewed the task of interpreting the plain text of the statute in favor of the administration’s upside-down version of the statute. As Humpty Dumpty said in Lewis Carroll’s “Through the Looking-Glass,” “when I use a word … it means just what I choose it to mean” and that was the administration’s approach in this case: “up” means “down,” “stop” means “go” and “state” means “state plus federal government.” Today, six members of the Supreme Court agreed.

In 2012, Chief Justice Roberts wrote: “It is not our job to protect the people from the consequences of their political choices.” But that is precisely what the court did today by elevating purported intent over text. He concluded today’s opinion:

In a democracy, the power to make the law rests with those chosen by the people. Our role is more confined—‘to say what the law is’ … [I]n every case we must respect the role of the Legislature, and take care not to undo what it has done … Congress passed the Affordable Care Act to improve health insurance markets, not to destroy them. If at all possible, we must interpret the Act in a way that is consistent with the former, and avoids the latter.

So the majority muddied the water in order to declare the relevant text ambiguous and focus, instead, on the aspirations of the administration and certain members of Congress for the law. In his dissenting opinion, Justice Antonin Scalia quipped that he “wholeheartedly agreed” with the majority that a statutory phrase must be interpreted in context, rather than in isolation. He continued, “Let us not forget, however, why context matters: It is a tool for understanding the terms of the law, not an excuse for rewriting them.”

With today’s decision, the court joins the executive branch in engaging in lawmaking—or at least repairing a law that won’t work. It is not the court’s job to fix the law—that falls squarely under Congress’s exclusively authority to make the law.

As Scalia observed of the significance of this decision, “The Court’s revision of the law authorizes the Internal Revenue Service to spend tens of billions of dollars every year in tax credits on the federal Exchange[ ]. It affects the price of insurance for millions of Americans. It diminishes the participation of the States in the implementation of the Act.”

Scalia continued, “What a parody today’s decision makes of Hamilton’s assurance” in Federalist 78 that the judiciary “has no influence over … the purse; no direction … of the wealth of society, and can take no active resolution whatever. It may truly be said to have neither Force nor Will but merely judgment.” Today’s decision shows plenty of force and will, but little judgment.

The ruling in King v. Burwell could have broader implications for those trying to curb the excesses of our imperial president. With immigration reform, recess appointments, the Waters of the U.S. rule, and many others, the Obama administration routinely bypasses Congress when “they won’t act,” arrogating to itself the ability to make the law—and not simply enforce it. The Supreme Court was called upon to police the limits between Congress and the executive in King v. Burwell, but instead, a majority of the justices bent over backwards to save Obamacare, once again.