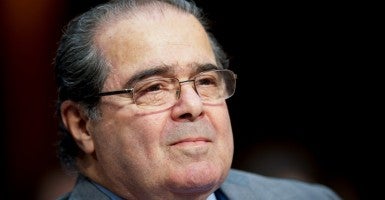 Justice Antonin Scalia is known for his sharp wit and even sharper pen. He pulled no punches in his dissent from the Supreme Court’s decision in King v. Burwell, allowing Obamacare subsidies to flow through the federal exchange.

1. “We should start calling this law SCOTUScare … [T]his Court’s two decisions on the Act will surely be remembered through the years … And the cases will publish forever the discouraging truth that the Supreme Court of the United States favors some laws over others, and is prepared to do whatever it takes to uphold and assist its favorites.”

2. “This case requires us to decide whether someone who buys insurance on an Exchange established by the Secretary gets tax credits. You would think the answer would be obvious—so obvious there would hardly be a need for the Supreme Court to hear a case about it.”

7. “The Court’s decision reflects the philosophy that judges should endure whatever interpretive distortions it takes in order to correct a supposed flaw in the statutory machinery. That philosophy ignores the American people’s decision to give Congress ‘[a]ll legislative Powers’ enumerated in the Constitution. They made Congress, not this Court, responsible for both making laws and mending them.”

8. “More importantly, the Court forgets that ours is a government of laws and not of men. That means we are governed by the terms of our laws, not by the unenacted will of our lawmakers. ‘If Congress enacted into law something different from what it intended, then it should amend the statute to conform to its intent.’ In the meantime, this Court ‘has no roving license … to disregard clear language simply on the view that … Congress ‘must have intended’ something broader.”

9. “Rather than rewriting the law under the pretense of interpreting it, the Court should have left it to Congress to decide what to do about the Act’s limitation of tax credits to state Exchanges.”