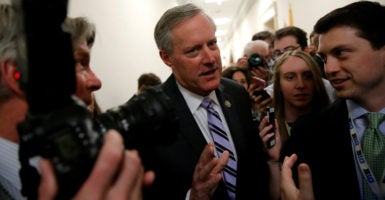 In the aftermath of the House GOP’s health care bill being pulled from a vote Friday, conservatives vowed to continue working with the fractured Republican conference toward health care reform.

“This is not the end of the debate,” Mark Meadows, a Republican from North Carolina and chairman of the House Freedom Caucus, said on ABC’s “This Week.” President Donald Trump, he added, “will deliver” on health care reform.

Republicans had scheduled a long-awaited vote Friday on the American Health Care Act, a bill that would have partially repealed Obamacare. But after failing to win the support of members of the Freedom Caucus, along with some centrist Republicans, House Speaker Paul Ryan pulled the bill.

The Freedom Caucus is a group of roughly 40 conservative lawmakers in the House. Its members, including Meadows, vocally opposed the proposal because they didn’t believe it would lower insurance premiums, among other concerns. The bill had the support of Ryan and the Trump administration.

But on Sunday, Trump shifted to lay blame on the Freedom Caucus and outside conservative groups who opposed the legislation, including The Heritage Foundation and Club for Growth.

Democrats are smiling in D.C. that the Freedom Caucus, with the help of Club For Growth and Heritage, have saved Planned Parenthood & Ocare!

“Democrats are smiling in D.C. that the Freedom Caucus, with the help of Club For Growth and Heritage, have saved Planned Parenthood & Ocare!”

The Heritage Foundation, a conservative think tank, is the parent organization of The Daily Signal. Heritage’s lobbying affiliate, Heritage Action for America, formally opposed the repeal and replace bill brought forth by Ryan and the White House.

Responding to Trump’s tweet, Meadows, who played an integral role in the negotiation process said, “If [Democrats] are applauding, they shouldn’t.”

“Conversations in the last 48 hours,” Meadows added, “are really about how we come together in the Republican conference and try to get this over the finish line.”

Rep. Jim Jordan, R-Ohio, a founding member of the Freedom Caucus, called on the factions of the Republican conference to unite.

“Let’s stop doing the blame game and get back to work and do what we told the American people we were going to accomplish, which is repeal Obamacare and replace it with a patient-centered health care program,” Jordan said on “Fox News Sunday.”

The Freedom Caucus, Jordan added, did the country “a favor” in opposing the bill because it “didn’t repeal Obamacare.”

It is unclear whether the GOP will be able to fulfill its promise to repeal and replace Obamacare before Congress moves onto other legislative priorities such as tax reform.

Meadows, chairman of the House Freedom Caucus, said it is now incumbent on Republicans to “find some consensus.”

“It’s incumbent upon those two groups, the conservatives and the moderates, to come together, hopefully in the coming days, to find some consensus, to present something to the president that certainly not only gets him 216 votes, but, hopefully, 235 votes,” Meadows said.

“To put a stake in it today would not be accurate, and nor would be the narrative that this is a great failure for the president.”