What Trump’s Meeting With Angela Merkel Means for NATO 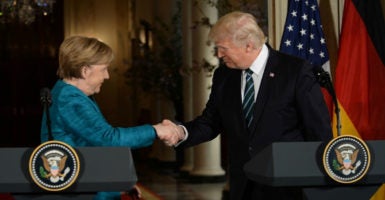 The president also repeated his call for European members of NATO to increase spending on defense. As I stated last week, Trump was right to encourage the chancellor to follow through on her pledge to increase her nation’s defense expenditures to 2 percent of gross domestic product.

At the White House, Merkel recommitted to this goal, saying: “We committed to this 2 percent goal until 2024. Last year we increased our defense spending by 8 percent, and we’re going to work together again and again on this.”

As the largest economy in Europe and the second most populous NATO member after the U.S., Germany is right to take on a larger role in bolstering collective defense, which must begin with increasing of its own defense spending.

It is important to note that defense spending in Europe has been increasing in recent years, although it is still far too low. In 2016, 16 NATO members increased their defense expenditures as a share of GDP.

In addition, it is essential to appreciate that the U.S. remains engaged in Europe because it is in our interest to do so. A secure, stable Europe has allowed prosperity to flourish. The U.S. and Europe are each other’s top trading partners, and European investment accounts for almost 70 percent of foreign investment in the U.S.

Roughly half of the U.S. troops in Europe are currently based in Germany, with the German government helping to pay for basing costs. A permanent U.S. presence in Europe shows the United States is willing and able to live up to our NATO treaty obligations, thus making it less likely that Russia will make a miscalculation.

In addition, being nearer to global hot spots in the Middle East allows U.S. policymakers more numerous and timely options for responding to incidents in the region.

Trump and Merkel also expressed commitment to the Minsk II cease-fire agreement in Ukraine. Following up on this commitment means the U.S. and Germany must push Russia to live up to its commitments, and that both the U.S. and Europe should extend sanctions against Russia for its ongoing aggression in Ukraine.

Gen. Joseph Dunford, chairman of the Joints Chiefs of Staff, recently described the importance of alliances for the U.S., saying: “From a U.S. perspective, I would tell you I believe our center of gravity as a nation, through a security lens, is the network of alliances.”

Germany is one of these important allies. As such, the administration should look to strengthen cooperation with Germany in the critical areas of NATO, support for Ukraine, and addressing the dangers posed by Islamist terrorism.