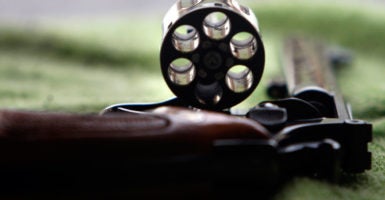 Donald Trump’s Supreme Court nominee, Neil Gorsuch, faced questions about the Second Amendment during the second day of his confirmation hearings, to which he responded, “Heller is the law of the land.”

In the Heller decision, a case formerly known as District of Columbia v. Heller, the Supreme Court overturned Chicago and Washington, D.C.’s, virtual bans on handguns, upholding the Second Amendment rights of Americans.

Sen. Dianne Feinstein, a Democrat from California, pressed Gorsuch about whether he “agrees” with the late Justice Antonin Scalia’s opinion in the case, which upheld an individual’s right to bear arms.

Heller makes clear the standard that we judges are supposed to apply. The question is whether it is a gun in common use for self-defense, and that may be subject to reasonable regulation. That’s the test as I understand it. There is lots of ongoing litigation about which weapons qualify under those standards. And I can’t prejudge that litigation.

Feinstein then continued to press Gorsuch on whether he agrees with Scalia’s opinion.

Feinstein: “I’m just asking, do you agree with [Scalia’s] statement, yes or no?”

Gorsuch: “Whatever’s in Heller is the law, and I follow the law.”

Feinstein: “So you agree with it?”

Gorsuch: “It is not a matter of agreeing or disagreeing, senator, respectfully, it’s a matter of it being the law and my job is to apply and enforce the law.”

Feinstein then raised another Second Amendment case from Maryland, where the 4th U.S. Circuit Court of Appeals heard a challenge to a 2013 Maryland law that banned the sale of large-capacity magazines and made it illegal to possess “the vast majority of semi-automatic rifles”—more broadly referred to as assault weapons.

In that case, Kolbe v. Hogan, the three-judge panel reversed a district court’s ruling that had rejected the plaintiffs’ Second Amendment claims.

Interaction about this case began with Feinstein asking Gorsuch whether he agrees with Judge Harvie Wilkinson’s opinion in that decision. Wilkinson is a federal judge serving on the 4th Circuit Court of Appeals.

According to Feinstein, Wilkinson said the Second Amendment is ambiguous, and that voters—not the courts—should decide whether to adopt gun regulations.

Gorsuch responded, “Heller is the law of the land,” adding, “Judge Wilkinson may disagree with it and I understand that … but he will follow the law no less than any other judge in America. I am confident of that.”

The entire interaction went as follows:

Feinstein: “Do you agree with Judge Wilkinson that the Second Amendment is ambiguous? Should the ambiguity be decided by the court or legislatures?”

Gorsuch: “I would begin by saying, I hold Judge Wilkinson in high regard. He’s a very fine man and a very fine judge.”

Feinstein: Can you say yes or no?

Gorsuch: “The Supreme Court of the United States isn’t final because it is infallible as Justice Jackson reminds us, it is infallible because it is final. And Judge Wilkinson had his view, and the Supreme Court has spoken. And Heller is the law of the land and Justice—Judge Wilkinson may disagree with it and I understand that. And he may—but he will follow the law no less than any other judge in America. I am confident of that. He’s a very fine judge who takes his oath seriously.”

Confirmation hearings for Gorsuch began Monday, and will continue through Thursday. The Senate Judiciary Committee is expected to vote on Gorsuch’s nomination by April 3.