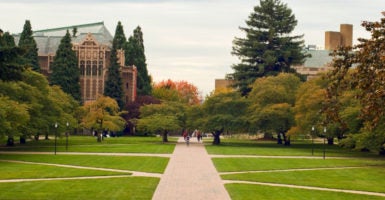 For decades, the federal government has increased spending on higher education programs with not much to show for it—other than higher tuition prices.

Today, American students and taxpayers are in bad shape when it comes to college costs. The U.S. has $1.3 trillion in outstanding student loan debt, most recent graduates are not paying off their loans, and taxpayers are projected to forgive $108 billion in student loans over the next 10 years due to loan forgiveness programs alone.

Needless to say, change to the higher education spending status quo is welcome news. Along with significant spending cuts to wasteful K-12 programs, the 2018 budget proposal does the following:

As implied by the name, the Federal Supplemental Education Opportunity Grant program simply supplements the already generous Pell Grant program, which offers funding for low-income students to attend college. This redundant federal spending is, as the 2018 Blueprint puts it, “a less well-targeted way to deliver need-based aid than the Pell Grant program.”

The Trump administration’s 2018 budget would cut the program by $3.9 billion, which the administration notes would put the Pell Grant program on more solid financial footing for the next 10 years. While the program is still expansive—due in part to expanded eligibility—this budget cut is a significant first step in restoring pre-2008 funding levels (the point at which the program doubled in size). The Trump administration’s budget cuts $193 million from the Federal TRIO programs and Gaining Early Awareness and Readiness for Undergraduate Programs (GEAR UP)—programs targeted to low-income students that have shown little effectiveness over the years.

Similarly, GEAR UP, which is specifically geared toward low-income students, is a redundant program with a sub-par record of accomplishment. A 2013 Brookings Institution report indicated that federal college prep programs “show no major effects on college enrollment or completion,” despite the annual $1 billion investment.

The Federal Work-Study Program, in which students engage in federally funded jobs on or off campus often while using federal student loans, has led to a spider web of taxpayer dollars subsidizing the college experience.

Although working while in school does help students finance their education, it does not justify a federal program. Additionally, Inside Higher Ed has reported that wealthier students are actually more likely to benefit from Federal Work-Study than the low-income students the program was intended to help.

The president’s proposed budget cuts in the Federal Work-Study Program could help streamline those funds to low-income students who are most in need of assistance.