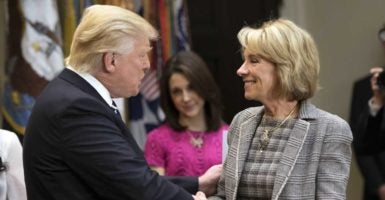 John Fleming is manager of data graphics services at The Heritage Foundation.

For the first time in decades, an administration is significantly trimming the budget at the Department of Education.

The Trump administration’s budget blueprint, or “skinny budget,” cuts $9 billion from the agency’s $68 billion budget, trimming spending at the department to $59 billion. That represents a 13 percent reduction in discretionary spending, demonstrating a commitment to restoring federalism in education.

The Trump administration’s skinny budget, released this morning, called for some long-overdue reductions in the federal education spending spree.

This formula grant program sends federal funding to state education agencies, which in turn provide funds to districts and nonprofits that apply for aid to manage community learning centers.

Not only is this not an appropriate activity for the federal government to undertake and fund, but there is no evidence that the program, which began in 1994, is effective.

According to the Department of Education’s 21st CCLC “Program Performance Plans and Reports” for 2011 (the most recent report available), the program largely failed to meet academic improvement targets established by program administrators. In 2016, taxpayers spent $1.2 billion on the program.

The Supporting Effective Instruction program is a formula grant funded program and had been previously known as the State Teacher Quality Grants program under No Child Left Behind.

Supporting Effective Instruction grants are awarded via formula to state education agencies which then provided funds to districts for class size reduction, teacher professional development, and teacher recruitment efforts, among other uses.

The budget also trims $193 million from the TRIO and Gaining Early Awareness and Readiness for Undergraduate Program (GEAR UP) programs. The TRIO and GEAR UP programs are intended to increase access to and completion of college for low-income students.

Together more than $1.2 billion was appropriated for these programs—$900 million for TRIO and $322 million for GEAR UP—in 2016. The programs provide college counseling, mentoring, and tutoring services.

As we have noted in the past, these programs add to already high levels of higher education spending, and there is little evidence they have met their goals of increasing college readiness for disadvantaged students. As such, they should be eliminated and instead handled at the state and local level.

Other reductions to higher education expenditures include the elimination of the Federal Supplemental Educational Opportunity Grant program (saving $732 million) and a $3.9 billion reduction in Pell carry-over funding, while leveling off discretionary spending for the grants.

Several other categorical programs are also eliminated, paving the way for reductions in the bureaucratic compliance burden currently levied on states by the federal Department of Education. The budget correctly identifies the need to zero out funding for these various programs. It is not the appropriate role of the federal government to fund high school counseling programs, after school programs, teacher professional development, and the myriad other policies contained within these programs.

Their proliferation over the decades since the enactment of the Elementary and Secondary Education Act and since the creation of the Department of Education itself reflects a “program for every problem” mentality, which has contributed mightily to Washington’s micromanagement of local school policy. Moreover, these programs have failed to improve outcomes for disadvantaged students over the decades.

Although the administration’s budget makes great strides toward restoring state and local control of education through reductions in the size and scope of the Department of Education’s budget, it also increases spending on several programs.

The Title I program, the largest program under the Every Student Succeeds Act, would see an increase of $1 billion. Notably, however, the budget encourages districts to pursue weighted student funding and a system of public school Title I portability, giving students needed options outside of their assigned district school.

This public school portability component within Title I could enable a student in a district school to direct their share of Title I funds to “purchase” a class at another public school or public charter school, acting as a sort of public school “micro” voucher.

The budget also suggests spending $250 million on a new “private school choice program.” As we have noted previously, creating a new federal school choice program, while well-intentioned, is not the role of the federal government and could further entangle Washington in local school policy and private education.

There is currently conservative leadership at the helm in a record 68 percent of state legislatures, and with conservatives controlling both legislative chambers and the governorship in 24 states, this is an unprecedented opportunity to advance education choice in the states.

The administration should support efforts like the Academic Partnerships Lead Us to Success (A-PLUS) Act, which would allow states to completely opt out of programs under the Every Student Succeeds Act, and put dollars to state education priorities. Through A-PLUS, and in this current conservative landscape, states would be well-positioned to advance education choice.

Overall, the budget represents a significant step toward reducing the size and scope of the Department of Education. And as Education Secretary Betsy DeVos correctly noted during remarks Tuesday to the National Lieutenant Governors Association meeting, “Federalism isn’t an antiquated idea … Our nation’s founders reserved most powers, including education, to the states.”

Reductions in the Department of Education’s budget make way for states and localities to fund and manage programs that directly affect students in the classroom, better serving students, teachers, and taxpayers.