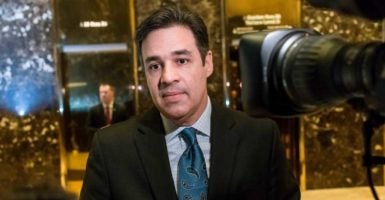 Several members of the House Freedom Caucus shared their concern for the future of entitlement reform, emphasizing disappointment that it was not a part of President Donald Trump’s newly released budget.

“I probably was more optimistic on entitlement reform a few weeks ago than I am now,” Meadows said, referencing a recent meeting with Trump.

“I can tell you that I brought up entitlement reform to the president a week or so ago, and his pushback was a little stronger than I expected,” Meadows said. “It’s gonna take a lot more encouragement in terms of actually tackling entitlement reform.”

Gohmert said that entitlement reform is not a conservative or Republican issue, but an issue for all Americans.

“I don’t know that this is even a conservative arena, because if we don’t do something, we’re not gonna save Social Security or Medicaid,” Gohmert said.

Gohmert emphasized the importance of passing reform to Social Security and Medicaid sooner rather than later.

“We can’t wait to do some of these things. The longer we wait, the more dramatic it’s gonna be,” Gohmert said.

“If you increase defense spending, the left is not gonna allow him to decrease nondefense discretionary [spending] to the extent that he wants to decrease it. We’re gonna have to fight a different way to balance the budget,” Labrador said, referencing the large-scale cuts Trump is proposing in his budget.

Labrador said he believes Trump’s budget will evolve in the next year.

“I think the next step, and this is not gonna be this year, but the next step is the president’s gonna need to realize that we need to make some major reforms to entitlements,” Labrador said.