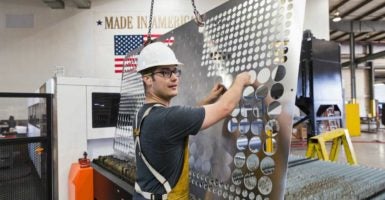 Polling has found that many union members are dissatisfied with the value of service they receive. (Photo: Don Mason Blend Images/Newscom)

Workers should be represented by people they choose, rather than by legacy institutions.

Recent Heritage Foundation research found that only 6 percent of union workers covered by the National Labor Relations Act voted for their current union representation. Most inherited organizations and representatives were voted in by earlier generations of workers.

Out of 8 million unionized private sector employees, only 478,000 voted in an election for their union representation.

Most unions organize through card check campaigns, not secret ballots. This prevents employees from directly voting on whether or not they want to join a union, and even which union they wish to join.

Further, the National Labor Relations Board assumes that once a union has been voted into place that a majority of workers desire to keep their representatives from that point on, forever. There are some ways to challenge a union; an employer can call for an election if he believes the representatives no longer have majority support, for example, but he must provide evidence.

There’s a Catch-22, though: Employers are forbidden from “soliciting” such evidence from their employees through surveys or similar methods.

Currently, unions do not regularly stand for re-election and sometimes organize while entirely avoiding an election. Instead of allowing employees to begin the process for an election when they desire it, the NLRB only allows workers to call for an election for a one-month period every three years.

Further, workers have to collect signatures from 30 percent of all employees saying they want an election, but only during that one-month period, and not while on the worksite or on the clock.

Should someone accomplish this feat, or merely attempt it, they may face expulsion from the union (Section 31-24). This prevents them from participating in any union elections, or even from the negotiation of the contract, because, despite being expelled, the union still represents them.

In one case, farm workers attempting to decertify the United Farm Workers—an organization which, they contend, had done nothing for them in decades—were prevented from doing so by California’s Agricultural Labor Relations Board, which takes a strong pro-union stance. The election was held in 2013, but the agency refuses to count the ballots. Government labor institutions are currently designed to empower unions, not to empower workers. The NLRB can change that.

The NLRB and the Department of Justice should change election procedures to give unionized workers greater freedom to vote to change their representation.

The changes would increase the ease of requesting an election, as well as compelling unions to be supported by a majority of the workers in the workplace.

The NLRB can improve the ability to call for elections by enacting these changes through its administrative powers. Doing so would make unions more democratic, more responsive to workers, and would better comport with American ideals and principles.