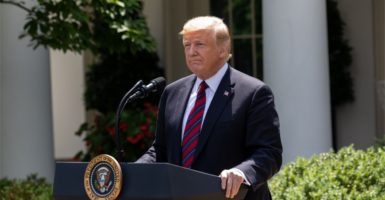 The New York state Assembly passed a bill Wednesday to allow Congress to obtain information on state tax returns for elected officials, which would include President Donald Trump’s returns.

The bill passed 84-53 and would allow the New York Department of Taxation and Finance commissioner to release any state tax returns about those in federal, state, and local elected or other upper-level public offices to leaders of congressional tax-writing committees, NBC News reported Wednesday.

It would apply to personal and business income taxes filed in the state, according to The Associated Press.

An earlier version of the New York bill that passed through the state Senate in early May would allow Congress to take a look at “any” New Yorker’s state tax returns, NBC reported. This provision, however, has been changed after some believed such a ruling would go too far.

New York Democratic Gov. Andrew Cuomo will need to sign the legislation to make it official, but it is unclear whether he will do so. A spokesman for Cuomo said the governor supports the principle behind the bill, but will carefully look over the bill before making a decision, according to The AP.

Proponents of the bill say it is about increasing transparency.

“We are affirming Congress’s role as a co-equal branch of government and the sacred constitutional principle that nobody is above the law, not even the highest elected official in the land,” Democratic New York state Sen. Brad Hoylman said, The AP reported.

Those against the legislation say it is politically driven, with Republican Assemblyman Doug Smith saying the bill was about “using this body as a weapon against” Trump, NBC reported.

The bill’s language does not mention Trump by name, according to The AP.

“We are traveling down a path that we should not be traveling down,” Democratic lawmaker Michael Benedetto said, NBC reported. “No legislature should craft legislation for political reasons just to get a few people they consider their enemies.”

Cuomo’s office did not respond to The Daily Caller News Foundation’s request for comment in time for publication.