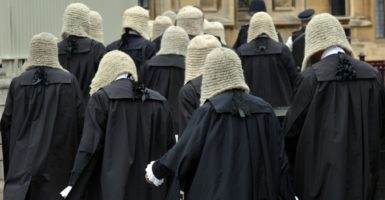 Some laws just need to go, and both Canada and Great Britain are showing why.

Thus, two of America’s closest allies, whose legal traditions reflect our own, are bringing measured, commonsense improvements to their outdated and outsized criminal law books.

Canadian courts have ruled some of their criminal laws unconstitutional, yet those laws still remain on the books, alongside other outmoded or unnecessary laws that confuse citizens and even judges as to what laws are valid.

Last year, for example, Justice Denny Thomas convicted Travis Vader of killing two people. But over two decades earlier, another court had declared the law Vader was charged with violating to be unconstitutional.

After some confused and delayed proceedings, the defendant was convicted of lesser manslaughter charges. “We are simply taking a leadership role,” the justice minister said, “and hoping that we will have this bill passed through and we can clean up the Criminal Code once and for all.”

Stephen Coughlan, a law professor at Dalhousie University, said that ensuring criminal laws are “knowable and accessible” is “a basic foundation of the rule of law.” Preserving outmoded or unnecessary laws “leads to problems with individuals expected to follow the laws, for police expected to enforce them and lay charges, and for judges who must determine convictions based on laws on the books.”

Among the colorful Criminal Code provisions that Coughlan identifies for repeal are laws on “pretending to practice witchcraft,” duels, and water-skiing after sundown.

In Britain, a standing Law Commission currently has one basic task: Prune the country’s “voluminous and eccentric” collection of over 44,000 primary acts. John Saunders, as head of the statute repeal squad, once said, “Parliament is brilliant at making the laws, it is not quite so good at getting rid of them.”

Britain’s Law Commission has identified over 200 laws to axe in 2017.

Former Commission Chairman Sir James Munby argued that “[g]etting rid of statutory dead wood helps to simplify and modernize our law, making it more intelligible. It saves time and costs,” Munby said, “for lawyers and others who need to know what the law actually is, and makes it easier for citizens to access justice.”

“English law is like a cluttered closet,” said Saunders, “full of things that have gone out of style or don’t fit anymore”—meaning someone has to clean the mess and toss the excess.

In the late 1990s, Saunders led the repeal of outmoded acts such as regulating rent payments in corn and inciting mutiny at sea during the Napoleonic Wars. Laws likely headed for a well-deserved and long-overdue retirement include prohibitions against carrying wooden planks down busy sidewalks, drunk horse-riding, and suspicious salmon handling.

In 1987, Robert H. Joost, then a judgment officer at the U.S. Commodity Futures Trading Commission during the Reagan administration, argued that a “[s]implification and rationalization of [federal criminal] laws are overdue and important to society.”

Joost identified many ways to make a “more readable federal criminal law” that he argued “would contribute to a more efficient criminal justice system.”

Meese addressed several fundamental problems in our code, which all make it “possible today for an honest person, acting in good faith, to commit a felony without any knowledge that he or she is doing so. No one should be convicted,” Meese wrote, “let alone imprisoned—in that circumstance.”

Canada and Britain have shown that federal reform is possible, practical, and necessary.

As Joost argued toward the end of the Reagan administration, “[s]implifying federal criminal laws is in the public interest and the necessary groundwork has been laid. All that remains is a commitment to see the task through.”