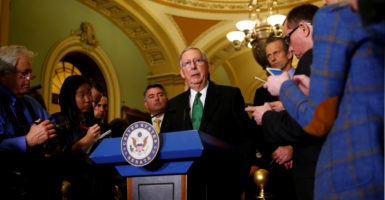 Senate Majority Leader Mitch McConnell, pictured during a news conference March 7, has stressed that there's a "lot to like" in the House GOP's Obamacare replacement plan. But he also said that members who dislike the bill would have the opportunity to make changes. (Photo: Eric Thayer/Reuters/Newscom)

The highly anticipated Obamacare replacement plan cleared the first of several hurdles in the House this week, where the House GOP’s proposal was the focus of intense scrutiny and opposition.

But as the bill makes it way through the lower chamber, the American Health Care Act could already be facing a long and difficult road ahead in the Senate.

There, Senate Majority Leader Mitch McConnell needs 51 Republicans to vote in favor of the Obamacare proposal.

But so far, support for the bill in the upper chamber already appears to be wavering.

Just hours after the House Ways and Means and Energy and Commerce committees released the text of the plan Monday evening, Sens. Rand Paul, R-Ky., and Mike Lee, R-Utah, criticized the bill.

“What’s been introduced in the House in the last 24 hours is not the Obamacare replacement plan, not the Obamacare repeal plan, we’ve been hoping for,” Lee said Tuesday. “This is instead a step in the wrong direction, and as much as anything, it’s a missed opportunity.”

Then, Sen. Tom Cotton, R-Ark., encouraged House Republicans to go back to the drawing board.

Sen. Ted Cruz, R-Texas, too, was skeptical about the bill’s fate in the upper chamber.

“The House bill as currently drafted, I don’t believe it will pass the Senate,” he told CNN after dining with President Donald Trump and first lady Melania Trump.

But Cruz didn’t rule out changes being made to the bill, and ones that could sway his fellow conservatives.

“We can fix it,” the Texas senator continued.

Cruz, Lee, and Paul, as well as Freedom Caucus members, have been urging Republican leaders to take up a bill crafted in 2015 that repealed large chunks of Obamacare.

The legislation, passed through reconciliation, eliminated the penalties associated with the individual and employer mandates, and repealed Obamacare’s tax credits, Medicaid expansion, and taxes. It also stripped Planned Parenthood of its federal funding.

The 2015 repeal bill cleared both the House and Senate, but President Barack Obama ultimately vetoed the bill.

Republicans are using reconciliation once more to fast-track the Obamacare replacement plan through the Senate, where it needs 51 votes to pass.

But the GOP holds 52 seats in the upper chamber, which leaves them with little wiggle room. If more than two senators oppose the proposal, the bill fails.

Already, Paul, who is the bill’s biggest critic, has said the replacement plan isn’t going anywhere in the Senate.

“Obamacare-lite: dead on arrival,” he told Fox News on Thursday night. “They might as well just start over.”

Though conservatives have been the most outspoken against the House GOP’s replacement plan, McConnell isn’t only facing complaints from the Senate’s right flank.

Moderate Republicans in the upper chamber have criticized the replacement proposal, too. But their concerns differ substantially from those of their conservative colleagues.

In an interview with Yahoo News, Sen. Susan Collins, R-Maine, said she agreed with Paul that the legislation was “dead on arrival” in the Senate.

“I do not think it would be well received,” Collins said.

The Maine Republican said she is concerned by estimates projecting 6 million to 10 million Americans could lose coverage under the plan, and also disagreed with the proposed changes to the Medicaid expansion.

Republicans are still waiting on cost and coverage estimates from the Congressional Budget Office, which are expected next week.

But Collins also noted that the legislation is a “work in progress.”

“I want us to slow down to take more time to be sure we get this right,” Collins said.

Like Collins, four other Senate Republicans, Rob Portman of Ohio, Shelley Moore Capito of West Virginia, Cory Gardner of Colorado, and Lisa Murkowski of Alaska, said they are worried about changes to Obamacare’s Medicaid expansion.

“While we support efforts to repeal and replace the Affordable Care Act and make structural reforms to the Medicaid program, we are concerned that the Feb. 10 draft proposal from the House of Representatives does not provide stability and certainty for individuals and families in Medicaid expansion or the necessary flexibility for states,” the senators said in a letter to McConnell on Monday, referencing an early draft of the replacement plan.

The current Obamacare proposal phases out the Medicaid expansion in 2020, but states can continue to enroll those who are newly eligible and receive the enhanced federal match rate—95 percent in 2017, with a decrease to 90 percent for 2020 and beyond—until then.

After 2020, states that continue to enroll new Medicaid beneficiaries would receive the traditional federal match rate, an average of 57 percent.

Meanwhile, at an event with Politico, McConnell said there was “a lot to like” about the House GOP’s Obamacare replacement plan, which he said presented an opportunity to reform Medicaid and fix the private health insurance market.

But the Senate majority leader also contended that opposing senators would be able to offer fixes to the plan once it arrives in the upper chamber.

“People will offer amendments, there are unlimited amendments, unlimited,” McConnell said. “Not everyone is going to like everything in the bill. That’s the way legislation is. I’ll say it again, it’s not like nobody is going to have a chance to change it.”

The House GOP’s Obamacare replacement plan passed the House Ways and Means and Energy and Commerce committees this week. It will head to the Budget Committee next week, which is charged with packaging the two pieces of legislation together.

Once that occurs, the proposal heads to the House floor for a vote.