Conservatives Use Clout to Press for Full Repeal of Obamacare 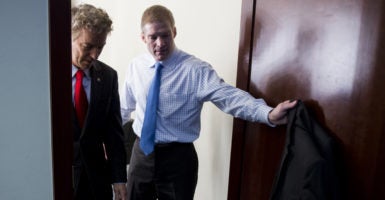 Sen. Rand Paul of Kentucky, left, and Rep. Jim Jordan of Ohio, right, have come together with other key conservatives to oppose any legislation that does not fully repeal Obamacare. (Photo: Bill Clark/CQ Roll Call/Newscom)

Conservatives in the House and Senate are leveraging their numbers in an attempt to influence the direction of legislation repealing Obamacare and ramp up the pressure on Republican leadership to bring a 2015 repeal bill back before members for another vote.

Their efforts began Monday night when Sens. Ted Cruz of Texas, Mike Lee of Utah, and Rand Paul of Kentucky said in a series of coordinated tweets, and later a joint statement, that they would support only a “full repeal” of Obamacare.

2 yrs ago, the GOP Congress voted to repeal Obamacare. That 2015 repeal language should be the floor, the bare minimum. #FullRepeal

2 yrs ago, GOP Congress voted to repeal #Obamacare. That 2015 repeal language should be the minimum. #FullRepeal @SenTedCruz @SenRandPauI

2 yrs ago, GOP Congress voted to repeal #Obamacare. That 2015 repeal language should be the minimum. #FullRepeal @SenMikeLee @SenRandPauI

“We have the votes to now tell the leadership this is what we want to do,” Paul said during a conference call with reporters Thursday. “We do have the votes. We’re a force to be reckoned with, and we want to be part of the negotiation over trying to make sure that we have complete repeal.”

The conservatives are rebelling against the draft bill leaked last week and instead want GOP leaders to revive the successful repeal bill from 2015 and bring it before members for a new vote.

That legislation passed both chambers of Congress, but President Barack Obama vetoed it in January 2016.

The 2015 bill repealed key provisions of the Affordable Care Act, including the individual and employer mandates, Medicaid expansion, tax credits, and taxes. It also stripped Planned Parenthood of federal funding.

But GOP leaders haven’t committed to that wording and instead say they want to include parts of a replacement plan in the bill dismantling the health care law.

Republicans will use a budget tool called reconciliation to repeal Obamacare; reconciliation fast-tracks legislation through the Senate and allows it to pass with 51 votes.

With control of 52 seats in the Senate, Republican leaders view reconciliation as the best way to repeal the health care law, especially since the legislation would earn President Donald Trump’s signature once it lands on his desk.

The GOP has a slim margin in the 100-member Senate, so Paul and his fellow conservatives are hoping to use their numbers to extract concessions from Republican leaders.

Since Vice President Mike Pence can break a tie, Republicans can lose no more than two votes.

“There have been rumors and rumblings of those in leadership putting forward something that is not a complete repeal, that some of us would refer to as Obamacare-lite,” Paul said. “We are for complete repeal.”

The same situation is unfolding in the House, where the bill fails if Republicans lose more than 20 votes.

The House Freedom Caucus stands roughly 40 members strong. If the entire group of conservative members opposed legislation repealing less of Obamacare than the 2015 reconciliation bill did, it wouldn’t pass the lower chamber, where Republicans have 238 seats.

When asked by The Daily Signal whether conservatives were worried their demand for the 2015 bill possibly would derail repeal efforts entirely, Jordan said the lawmakers weren’t concerned.

“We actually think you should do what you said you would do [in the 2016 campaign],” Jordan said.

House Speaker Paul Ryan said last month that Republicans would vote on a repeal bill this month, but details of a proposal haven’t yet been released.

A draft bill to replace Obamacare was, however, leaked to the press last week.

It was that legislation that sparked the critical response from the six conservative lawmakers, who said the proposal amounted to “Obamacare-lite.”

The draft document would repeal Obamacare’s major provisions, with some aspects effective in 2020 and others sooner, and implement parts of a replacement centered around age-based tax credits.

The conservatives, though, said the draft document stopped short of full repeal and, through the refundable tax credits, would create a new entitlement program.

“The draft legislation, which was leaked last week, risks continuing major Obamacare entitlement expansions and delays any reforms,” Walker said in a statement.

“Worse still, the bill contains what increasingly appears to be a new health insurance entitlement with a Republican stamp on it,” the Republican Study Committee chairman said.

Now, House Republican leaders are distancing themselves from the draft replacement plan.

Majority Whip Steve Scalise, R-La., told reporters at a press conference Tuesday that he had spoken to Walker, who said he couldn’t recommend the 170 members of the Republican Study Committee support the document.

“That draft is not even representative of where we are,” Scalise said. “[Walker is] working with us, and we’re in direct conversations with the chairman of the RSC as well as others about the best way to build a consensus to pass a bill to gut Obamacare.”

“That draft is no longer valid,” he said.

A spokesman for Scalise, the No. 3 House Republican, later told The Hill that the leaked document was an “older draft.”

For the last month, conservatives irked by the slow speed of repeal efforts have been pushing Republican leadership to pass a new bill with the 2015 language.

But although that language cleared both the House and Senate, some senators are skeptical about repealing Obamacare’s taxes and expansion of Medicaid eligibility.

Further compounding the divide between conservatives and their fellow Republicans is Trump, who has said the White House and new Health and Human Services Secretary Tom Price would send their own Obamacare replacement plan to Capitol Hill.

Trump has yet to do that, and it isn’t clear when he will. But the president has advocated a simultaneous repeal and replacement of Obamacare, a strategy that some conservatives, Lee among them, said would be dangerous.

Jordan and Paul, though, said Congress should pass a repeal of Obamacare and Paul’s Obamacare Replacement Act the same day.

Though Trump, the House, and the Senate aren’t yet on the same page regarding the future of the health care law, Jordan appeared poised to deliver a message to the president during an interview Tuesday morning on Fox News’ “Fox and Friends,” a morning show Trump is known to watch.

“We make this job too hard,” Jordan said. “Let’s do what we told the voters.”