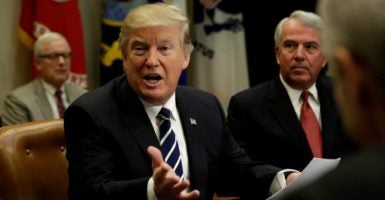 “The degree to which the intelligence apparatus wants to do in Trump is scary,” says the president of a government watchdog group. (Photo: Yuri Gripas/Reuters/Newscom)

Leaks from the White House seem to indicate a bureaucratic push against President Donald Trump and his administration, some government watchdogs have said.

“How do you conduct business when you think you’re being spied on, with good reason,” @NLPC says.

“There is a level of paranoia in the White House, but even paranoids can have real concerns,” Peter Flaherty, president of the National Legal and Policy Center, told The Daily Signal. “How do you conduct business when you think you’re being spied on, with good reason.”

The combination of former political appointees that converted to civil service positions, and a long-standing bias among federal bureaucrats have led to an attempt to undermine Trump, Flaherty said.

“The degree to which the intelligence apparatus wants to do in Trump is scary,” Flaherty said. “In recent years, intelligence agencies have trended left. Part of that has been Obama appointees. It’s also part of the education background of the people hired there for the last 20 years.”

Opposition to Trump may go beyond the intelligence agencies.

The Environmental Protection Agency, according to Politico, has career employees using an encoded app to communicate about work-related issues to stop Trump EPA employees from “undermining” the agency’s mission. The watchdog group Cause of Action Institute has made a freedom of information request for all of the encrypted communications because the Federal Records Act requires agencies to preserve all records made by employees working on official government business.

“If federal employees are using encrypted apps on their phones to avoid transparency laws, that’s a problem regardless of their political motivations,” Henry Kerner, an assistant vice president at the Cause of Action Institute, told The Daily Signal in an email statement. “The only reason to use these apps, instead of their government email accounts, would be to conceal their discussions from oversight. Federal agencies have a legal obligation to preserve all records made by employees working on official government business. Americans have a right to know if federal employees are using encrypted electronic messages to evade transparency.”

Trump has been criticized for tweeting last weekend that former President Barack Obama “had my ‘wires tapped’ in Trump Tower just before the victory.”

Although there were several news reports of interceptions, and of a potential FISA court order (named for the Foreign Intelligence Surveillance Act), Trump didn’t provide evidence from the executive branch agencies that Obama ordered wiretapping.

The White House is asking Congress to review the leaks, which is already investigating Russia’s effort to interfere with the presidential election.

“I think the smartest and most deliberative way to address this situation is to ask the House and Senate intelligence committees who are already in the process of looking into this to look into this and other leaks of classified information that are troubling to our nation’s national security,” White House press secretary Sean Spicer said Monday during a press briefing.

Among federal employees, about 95 percent of political contributions went to Democrat Hillary Clinton during the 2016 presidential race, according to an analysis by The Hill in October. Some federal workers have been in consultation with departed Obama administration officials to determine how they can push back against the Trump administration’s agenda, The Washington Post reported in January.

The Weekly Standard reported in a recent story that two negative op-eds on the Trump administration were written by White House officials who worked under Ben Rhodes, Obama’s national security spokesman.

Edward Price, a National Security Council spokesman for the Obama White House, transitioned back to the CIA after the election. He wrote an op-ed in The Washington Post, published on Feb. 20, that said, “I didn’t think I’d ever leave the CIA. But because of Trump, I quit.” It went on to say, “To be clear, my decision had nothing to do with politics.”

However, the Post followed up with a clarification stating Price contributed a total of $5,000 to Clinton’s presidential campaign and the Democratic Party in 2016.

One Obama White House employee who continued to work briefly for the White House under the Trump administration was Rumana Ahmed. After quitting, she wrote a piece for The Atlantic published Feb. 23, with the headline“I Was a Muslim in Trump’s White House.”

“When President Obama left, I stayed on at the National Security Council in order to serve my country,” Ahmed wrote. “I lasted eight days.”

This, she wrote, was because “it was an insult walking into this country’s most historic building every day under an administration that is working against and vilifying everything I stand for as an American and as a Muslim.”

The New York Times reported last May in a profile on Rhodes that: “In the front office, [Rhodes’] assistant, Rumana Ahmed, and his deputy, Ned Price, are squeezed behind desks, which face a large television screen, from which CNN blares nonstop.”

Fitton said this shouldn’t be a surprise.

“It’s not credible to believe that Obama supporters would plan to work long term for Donald Trump,” Fitton said. “Were these individuals interested in working for Donald Trump long term, or were they looking for an excuse to ding him?”