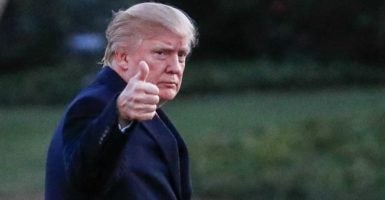 "President Donald Trump is onto something" regarding surveillance, according to the president of a watchdog group. (Photo: Erik McGregor/Sipa USA/Newscom)

There isn’t yet a paper trail, but there is a potential press trail to follow on President Donald Trump’s claim of surveillance by the Obama administration. Still, there’s a question about whether this action was illegal and whether the former president directed it—as Trump asserted in a series of tweets Saturday.

“President Trump is onto something,” @TomFitton says.

Terrible! Just found out that Obama had my “wires tapped” in Trump Tower just before the victory. Nothing found. This is McCarthyism!

Is it legal for a sitting President to be “wire tapping” a race for president prior to an election? Turned down by court earlier. A NEW LOW!

The genesis of the wiretapping story seems to be reporting from Heat Street and the BBC that President Barack Obama’s administration sought a FISA court order, named for the Foreign Intelligence Surveillance Act, to monitor the Trump campaign’s potential ties to Russia.

“It could be FISA, it could be surveillance. Look, I think [Trump has] made it clear there have been continued reports that have been out there,” White House press secretary Sean Spicer told reporters Monday. “I think the president made it clear yesterday that he wants Congress to go in and look at this. I think there is substantial reporting out there from other individuals and sources.”

Democrats and the media widely criticized Trump’s Saturday tweets for being posted without evidence.

J. Christian Adams, a former Justice Department attorney, said “wiretapping,” could be the wrong term and might distract from actual spying that must have occurred because of the leaked transcripts of former national security adviser Michael Flynn’s conversations.

“[The surveillance] may be from FISA, it may not be. If this is [National Security Agency] intercepts for the transcript without FISA, that would be worse, and leaking to The New York Times would demonstrate an astounding level of ideology in the bureaucracy,” Adams, president of the Public Interest Legal Foundation, told The Daily Signal.

Adams further disagreed with the White House’s demand for a congressional investigation.

“Congress does not have the skill set to do anything about this. If it goes to the House Oversight Committee, it will languish for months,” Adams said. “Trump needs to appoint an acting deputy attorney general with sharp elbows who isn’t afraid of the bureaucracy, not an Obama appointee.”

Judicial Watch, a conservative government watchdog group, announced a Freedom of Information Act lawsuit against the CIA, the Justice Department, and the Treasury Department regarding records related to the investigation of Flynn and his communications with Russian Ambassador Sergey Kislyak.

“President Trump is onto something. The Obama-connected wiretapping and illegal leaks of classified material concerning President Trump and Gen. Flynn are a scandal,” Judicial Watch President Tom Fitton said in a public statement. “Judicial Watch aims to get to the truth about these crimes, and we hope the Trump administration stands with us in the fight for transparency.”

The first report appeared on the website Heat Street, a U.S and U.K. website launched by Louise Mensch, a former member of Parliament who wrote a story in November—one day before the election—that said:

Two separate sources with links to the counterintelligence community have confirmed to Heat Street that the FBI sought, and was granted, a FISA court warrant in October, giving counterintelligence permission to examine the activities of ‘U.S. persons’ in Donald Trump’s campaign with ties to Russia … The first request, which, sources say, named Trump, was denied back in June, but the second was drawn more narrowly and was granted in October after evidence was presented of a server, possibly related to the Trump campaign, and its alleged links to two banks; SVB Bank and Russia’s Alfa Bank.

However, Mensch tweeted that she didn’t use the term “wiretapping” in her piece.

I see a lot of panic from Trumpers now I'm pointing out Paul Wood, Julian Borger and I did not report any 'Wiretap' https://t.co/ppqqjDVurT

I see a lot of panic from Trampers now I’m pointing out Paul Wood, Julian Borger and I did not report any ‘Wiretap’ https://t.co/ppqqjDVurT

Obama’s Director of National Intelligence James Clapper said Sunday on NBC’s “Meet the Press,” when asked if there was a FISA, “I can deny it … not to my knowledge.”

During the Monday press gaggle, Spicer said regarding Clapper: “I take him at his word that he wasn’t aware [of a FISA order], but that doesn’t mean it didn’t exist.”

On another Sunday show, ABC’s “This Week,” former Attorney General Michael Mukasey, who served in the George W. Bush administration, said it was likely the Trump administration would find that there was surveillance.

“I think he’s right in that there was surveillance and that it was conducted at the behest of the attorney general—at the Justice Department,” Mukasey said. He added, “It means there was some basis to believe that somebody in Trump Tower may have been acting as an agent of the Russians for whatever purpose. Not necessarily the election, but for some purpose.”

Obama gave what seemed to be a denial through a spokesman over the weekend.

“A cardinal rule of the Obama administration was that no White House official ever interfered with an independent investigation led by the Department of Justice,” spokesman Kevin Lewis said in a statement. “As part of that practice neither President Obama nor any White House official ever ordered surveillance on any U.S. citizen. Any suggestion otherwise is simply false.”

The Guardian on Jan. 10 also reported a judge rejected the FBI’s request for a FISA warrant in June, but only cited the Heat Street article to confirm an order had been granted.

Still, others reported the court granted the FISA warrant.

Neither Mr. Trump nor his associates are named in the FISA order, which would only cover foreign citizens or foreign entities—in this case the Russian banks. But ultimately, the investigation is looking for transfers of money from Russia to the United States, each one, if proved, a felony offense.

Talk radio host Mark Levin, a constitutional attorney and former chief of staff to Attorney General Edwin Meese III in the Ronald Reagan administration, cited these and other news reports during an interview Sunday on Fox News.

“The issue isn’t whether the Obama administration spied on the Trump campaign or transition of surrogates; the issue is the extent of it,” Levin said.

The Washington Post “Fact Checker” column gave Trump “Four Pinocchios,” for the surveillance claim, stating: “Even if these media reports are accepted as accurate, neither back up Trump’s claims that Obama ordered the tapping of his phone calls. Moreover, they also do not back up the administration’s revised claim of politically motivated investigations.”