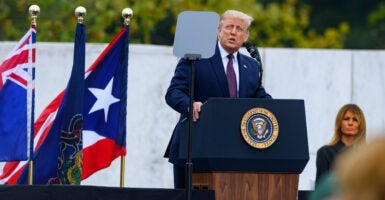 President Donald Trump cited grandparents traveling on vacation, a student returning to college, another returning from celebrating his grandmother’s 100th birthday, and a woman three months pregnant as examples of those who died as heroes 19 years ago aboard United Airlines Flight 93.

“Every passenger and crew member on the plane had a life filled with love and joy, friends and family, radiant hopes and limitless dreams,” Trump said Friday morning at the Flight 93 National Memorial in Shanksville, Pennsylvania.

The memorial honors the 40 passengers of Flight 93 who decided to charge the airliner’s cockpit in an attempt to prevent Islamist terrorists who had hijacked the plane from crashing it into the U.S. Capitol in Washington.

“When the plane was hijacked, they called their families and learned that America was also under attack,” Trump said, adding:

Then they faced the most fateful moment of their lives. Through the heartache and the tears, they prayed to God. They placed their last calls home. They whispered the immortal words, ‘I love you.’ Today, those words ring out across these sacred grounds, and they shine down on us from heaven above.

On Thursday, the day before the 19th anniversary of the 9/11 attacks, the Islamic State terrorist group issued a statement calling the attacks a “great event” and “deciding moment” in the history of Islam. But ISIS called al-Qaeda—the terrorist group behind the attacks—“shortsighted” in aiming only for the United States, the SITE Intelligence Group reported.

The president spoke to a socially distanced audience at the national memorial. The al-Qaeda terrorists also crashed two airliners into the twin towers of the  World Trade Center and a third into the Pentagon, killing nearly 3,000 in all.

Analysts believe the terrorists aboard Flight 93 intended to plow the airliner into the Capitol building.

“When terrorists raced to destroy the seat of our democracy, the 40 of Flight 93 did the most American of things. They took a vote, and then they acted,” Trump said. “Together, they charged the cockpit. They confronted pure evil, and in their last act on this earth, they saved our Capitol.”

In this Pennsylvania field, 40 intrepid souls of Flight 93 died as true heroes. Their momentous deeds will outlive us all. In the days and weeks after 9/11, citizens of all faiths, backgrounds, colors, and creeds came together, mourned together, and rebuilt together.

When the passengers charged the cockpit, Flight 93 was about 20 minutes away from its intended target, and Trump said the “battle turned in the skies above this field.”

“The only thing that stood between the enemy and a deadly strike at the heart of American democracy was the courage and resolve of 40 men and women, the amazing passengers and crew of Flight 93,” Trump said.

The president also paid tribute to the first responders who saved lives at the World Trade Center and at the Pentagon, and to all of the victims. He praised the 6 million Americans who have enlisted in the military since 9/11.

Speaking to surviving family members of Flight 93 crew members and passengers, Trump returned to the topic of those who died in the Pennsylvania field.

“The men and women of Flight 93 were mothers and fathers, sons and daughters, husbands and wives,” Trump said, adding:

Nothing could have prepared them for the dreadful events of that morning. But when the moment came, when history called, they did not hesitate. They did not waver.

Forty towering patriots, rose up, took charge, made their stand, turned the tide, and changed the course of history forever.

Our sacred task, our righteous duty, and our solemn pledge is to carry forward the noble legacy of the brave souls who gave their lives for us 19 years ago.