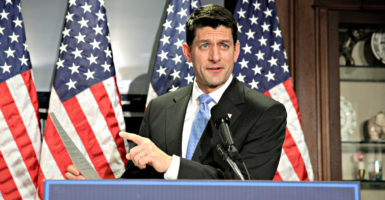 Rather than listening to constructive feedback from the policy community, however, House Republicans appear to be attempting to throw chaff in the air and ram their flawed proposal through Congress.

Proponents of the American Health Care Act, unveiled Monday evening, argue that their proposal represents the conservative consensus on sound health care policy. Brendan Buck, counselor to Ryan, points specifically to The Heritage Foundation’s past advocacy of tax credits as a means to address coverage gaps and establish equitable tax treatment between the individual and group insurance markets.

Such arguments distort the conservative critique of Ryan’s proposal by oversimplifying the issues at stake.

Conservative criticism of this bill stems from problems with its structure and sequencing of reforms. Whether and how tax credits should be used to finance the purchase of insurance on the individual market is a complicated question, not a simple yes-or-no exercise.

—Who pays for the tax credits? Heritage and others who have acknowledged the potential role for tax credits in health care reform consistently have urged Congress to grapple with the costs of asking taxpayers to shoulder new spending commitments. As Heritage also noted in 2007, proposals such as refundable credits run the risk of expanding the scope of our already massive health care entitlements if not structured to offset new payments to nontaxpayers with other cuts in entitlement spending.

—Do the tax credits merely provide equity in tax treatment, or are they subsidies meant to serve as a Band-Aid on a broken and overregulated insurance market? The conservative critique of Obamacare always has been that it depends on subsidies to offset the costs to consumers imposed by federal benefit mandates and insurance market rules that encourage people to wait until they are sick to buy coverage. That such a regulatory architecture cannot and should not be propped up by creation of a new entitlement has been the conservative consensus for the past eight years.

In health policy, the complications extend well beyond cost and sources of financing, a fact acknowledged by the bill’s critics on the right.

To suggest that conservatives, in their openness in theory to tax credits, ever endorsed preserving Obamacare’s architecture with a different subsidy delivery vehicle is dishonest. And unfortunately, that’s what the American Health Care Act does.