For One Conservative, 2017 Looks Similar to 2009 Obamacare Debate 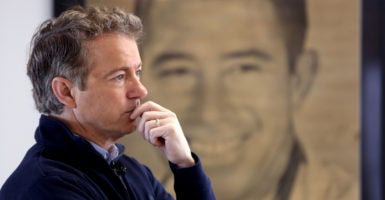 Sen. Rand Paul, R-Ky., criticized Republican leaders for keeping the Obamacare replacement proposal secret. He attempted to find the legislation that will ultimately repeal and replace Obamacare, but has so far been unsuccessful. (Photo: Scott Morgan/Reuters/Newscom)

For at least one conservative lawmaker, the current process for repealing and replacing Obamacare is beginning to look very similar to that of 2009, when Republicans accused Democrats of writing the Affordable Care Act behind closed doors.

Armed with a portable copy machine, Sen. Rand Paul, R-Ky., went on a crusade through the U.S. Capitol on Thursday to find the legislation that will ultimately repeal and replace the Affordable Care Act.

His goal was to see the elusive Obamacare bill himself, which was available in a reading room only to members of the House Energy and Commerce committees and their staff, and “demand a copy for the American people.”

I am heading to the secure location where they are keeping the House obamacare bill. I will demand a copy for the American people.

“We’ve been talking about it for six years, so we thought we ought to see it,” Paul said of the replacement plan. “We heard it was in a secret room, and that it was under lock and key with guards. And sure enough, when we got there, there were policemen posted at the door, and we were not allowed to see the Obamacare repeal bill.”

Ultimately, the Kentucky senator was unsuccessful. But in his quest, he was joined by some unlikely allies: congressional Democrats like Minority Leader Nancy Pelosi and Rep. Frank Pallone, D-N.J., who wanted to see a copy of the plan, too.

“This is not regular order, and it’s not good order for the American people,” Democratic Whip Steny Hoyer of Maryland told reporters after broadcasting live on Facebook his search for the bill.

The House Ways and Means and Energy and Commerce committees are expected to take up the Obamacare replacement plan next week, and members of the Ways and Means Committee are planning to work through the weekend to continue hashing out the details.

But while GOP leaders say they haven’t yet finalized the bill, conservatives believe the legislation is being drafted in secret, out of view from them and the American people.

For the lawmakers, the process for crafting the bill repealing and replacing Obamacare harkens back to 2009, when Democrats wrote the health care law.

“If you’d recall, when Obamacare was passed in 2009 and 2010, Nancy Pelosi said you’ll know what’s in it after you pass it,” Paul told reporters Thursday, paraphrasing what Pelosi said at the time. “The Republican Party shouldn’t act in the same way.”

Paul and the House Freedom Caucus, a group of approximately 40 conservative lawmakers, are urging Republican leaders to repeal as much of Obamacare as possible and use legislation from 2015 that repealed the major provisions of the health care law as a starting point.

That bill passed the House and Senate, but President Barack Obama vetoed it.

But as Republicans on the Ways and Means and Energy and Commerce committees continue to work on the bill, it’s unclear whether conservatives will get their way.

Even as Republicans head into the weekend, Paul continued to play hide-and-seek with the replacement bill and solicited his followers on Twitter for tips on where the plan may be hidden.

The Obamacare replacement bill remains hidden from the public! What secret location will they meet in this weekend to work on it?

Do you have a clue where the secret meeting on the secret Obamacare replacement bill will occur? Reply with your tips!

We are continuing our search for the Obamacare Lite bill! Do you know where the secret location might be? Has anyone seen the bill? pic.twitter.com/WcSIDTs0vP

Conservatives and Democratic lawmakers were given an accidental early glimpse at what Obamacare’s replacement may look like after a draft bill was leaked to the press late last month.

The document, which was reportedly from early February, repealed much of Obamacare and phased out the Medicaid expansion, which would eventually be replaced with a per capita allotment. Under a per capita allotment, states get capped payments based on the number of people enrolled in Medicaid.

It also capped the tax exemption for employer-sponsored coverage, required Americans to maintain continuous coverage or face a 30 percent increase in premiums for a year, and put a new system of refundable, age-based tax credits for purchasing health insurance in place.

But six conservative lawmakers—three in the House and three in the Senate, Paul included—revolted against the draft replacement plan, calling it “Obamacare lite.”

Paul said the draft bill kept elements of the Affordable Care Act like an individual mandate and Cadillac tax on expensive employer-sponsored plans, and the members vowed to oppose any legislation that didn’t repeal the health care law in full.

“These are Democrat ideas dressed up in Republican clothing,” Paul said of the draft document.

After the conservatives vocalized their opposition, House Republican leaders stressed that the proposal released was one from the early stages of discussion.

The opposition from the House and Senate conservatives is the latest setback for GOP leaders, who planned to put the repeal-and-replace measure before lawmakers for a vote in the coming weeks.

Conservatives specifically disagree with the inclusion of the refundable tax credits available to consumers purchasing coverage in the individual market, which they believe creates a new entitlement program.

But the lawmakers aren’t opposed to the notion of a tax credit as a whole.

A replacement plan crafted by Paul calls for a $5,000 tax credit available to individuals who contribute money to a health savings account, or medical savings account.

Despite the opposition from House and Senate conservatives, GOP leaders don’t appear to be backing down from the draft document.

A newer version of the Obamacare repeal bill obtained by Politico contains many of the same provisions as the earlier document, including the refundable, age-based tax credits.

According to Politico, though, there is one change: Wealthier Americans would not be able to qualify for the financial assistance.

Republican leaders said this week’s negotiations are still ongoing and that the replacement plan hadn’t yet been finalized. They said that’s the reason a draft wasn’t yet available to Democrats and Paul.

“[Republican] members and staff are continuing to discuss and refine draft legislative language on issues under our committee’s jurisdiction,” House Energy and Commerce Chairman Greg Walden, R-Ore., said in a statement Thursday.