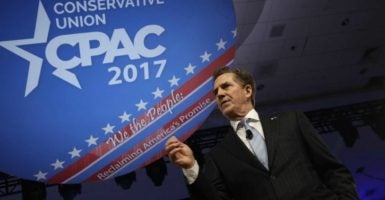 Heritage Foundation President Jim DeMint warns conservatives at CPAC not to accept the status quo in the wake of electoral victories. (Photo: Jeff Malet for The Daily Signal)

“We must think big, we must act bold. That’s the American way.”

That was the message Jim DeMint, president of The Heritage Foundation and former South Carolina senator, shared  Thursday morning with thousands of attendees at the Conservative Political Action Conference, or CPAC.

Conservatives must tackle these issues in spite of rampant resistance from the left, according to DeMint.

DeMint said the demonstrators aren’t “protesting policy, they are protesting an election outcome.”

Despite historic Republican and conservative wins last November, DeMint warned the audience that “Washington is extremely good at lowering expectations.”

“All the guardians of the swamp are already whispering in the ears of Republicans, in the Congress and in the White House, telling them not to keep their promises,” DeMint said.

He went on to describe that Republicans are receiving constant pressure to adopt the status quo:

With all of this opposition behind closed doors, DeMint said, “Our job as conservatives, and as the national conservative movement, is to make possible what the establishment says is impossible.”

Although many on the left and the right support a replacement of Obamacare, DeMint said, emphasizing the need for its repeal and restoration of a market-based health care system.

“Before Obamacare, America had the best health care system in the world,” DeMint said.

DeMint closed with a note of optimism, saying, “Let’s keep dreaming impossible dreams, because in America everything is possible.”