Why States Are Leaving Common Core in Droves 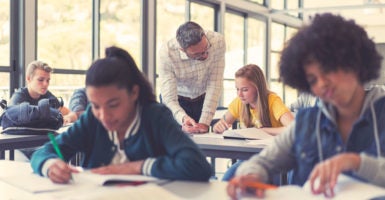 After less than 10 years in the classroom, Common Core could soon be on its way out.

The Obama administration introduced Common Core in 2010, imposing burdensome new standards and tests in an attempt to create uniform educational content across the nation. Despite loud objections from parents, teachers, school leaders, and state officials, 46 states ultimately adopted the standards due to a combination of funding carrots and regulatory sticks.

But over the past few years, states have begun to reclaim their authority to set educational standards. Approximately a quarter of participating states have either downgraded their participation or withdrawn completely from the two new testing consortia introduced by Common Core.

One of those consortia—the Partnership for Assessment of Readiness for College and Career—once had 20 state participants but now has fewer than four. Florida, for instance, an early adopter of Common Core, withdrew from the test consortium after finding that, among other issues, testing would occur over a 20-day period.

Maryland became the most recent state to roll back Common Core testing when officials there found that it overburdened teachers and didn’t help families.

How exactly? As The Baltimore Sun noted, it required schools to “clear their schedules for several weeks each spring, disrupting classes, and provide computers for students to take the tests in grades 3 through 8, as well as twice in high school.” Teachers lost valuable class time and encountered extensive disruptions.

Moreover, the test results were not delivered until the summer after the end of classes, thus limiting the ability of teachers to use the scores to improve classroom practice.

Maryland now plans to replace Common Core partnership tests with the Maryland Comprehensive Assessment Program—a shorter program that delivers test results sooner. While it remains an open question how much of a genuine departure from Common Core this represents, Maryland is at least taking the first step in reclaiming its autonomy by defining how it will assess student progress.

After all, states are much better suited to evaluate students according to standards that parents care about. National standards like Common Core give priority to national testing, but most parents typically ascribe little value to such large-scale assessments. According to an American Enterprise Institute study, parents rank school safety, values, healthy environment, and curricula as significantly more important than school performance on state tests.

In fact, national standards don’t actually help families or local schools improve their education—they only help number-crunching officials who distribute funding. My colleagues, Lindsey Burke and Jennifer Marshall, have written that parents can gain more useful information from classroom assessments and conversations with teachers about their child’s education.

Educators also say federal standards and assessments limit their own autonomy and capacity to innovate in the classroom. In his book “The Tyranny of Metrics,” Jerry Z. Muller writes, “Many teachers perceive the regimen created by the culture of testing and measured accountability as robbing them of their autonomy and of the ability to use their discretion and creativity in designing and implementing the curriculum of their students.”

By returning education to the local level, teachers and parents can work together to create the system that works best for their children.

Rather than following Washington’s dictates, states should reassert their standards-setting and assessment authority to better enable schools to respond to local families and teachers.

Maryland’s decision to replace these tests is a step in the right direction as the state works to re-establish how it will conduct assessments. Freed from the constraints of Washington, states can then look to each other for best practices and innovations while working with local communities to produce results.

One way states can solidify their own educational standards is by strengthening school transparency measures modeled after the independent reviews that are common in higher education, such as the Princeton Review or College Board. This would empower parents with clear information about school performance, enabling them to hold schools accountable for meeting the needs of their children, particularly when empowered with education choice options.

Maryland has not yet released the costs of its new tests, but other states that have similarly withdrawn from the Partnership for Assessment of Readiness for College and Career paid a hefty price to replace it. For instance, Florida spent $220 million on a new test, meaning taxpayers there are still paying to get out of Common Core.

More states should follow Maryland’s path and extricate themselves from the massive federal overreach that is Common Core. Greater transparency coupled with real choice in education—not centralized government—will strengthen education in states across the country.