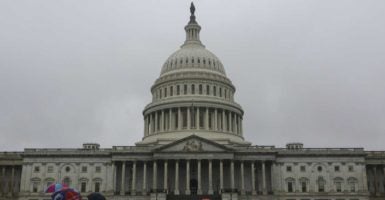 Several congressional staffers took $100,000 from an Iraqi politician while they had administrator-level access to the House of Representatives’ computer network. (Photo: Oliver/ZUMA Press/Splash News/Newscom)

Rogue congressional staffers took $100,000 from an Iraqi politician while they had administrator-level access to the House of Representatives’ computer network, according to court documents examined by The Daily Caller News Foundation’s Investigative Group.

The money was a loan from Dr. Ali al-Attar, an Iraqi political figure, and was funneled through a company with “impossible”-to-decipher financial transactions that the congressional information technology staffers controlled.

Imran Awan, ringleader of the group that includes his brothers Abid and Jamal, has provided IT services since 2005 for Florida Democrat Rep. Debbie Wasserman Schultz, the former Democratic National Committee chairwoman. The brothers are from Pakistan.

The trio also worked for dozens of other House Democrats, including members of the intelligence, foreign affairs, and homeland security committees. Those positions likely gave them access to congressional emails and other sensitive documents.

The brothers, whose access to House IT networks has been terminated, are under criminal investigation by the U.S. Capitol Police.

Wasserman Schultz resigned from her DNC post following a disastrous email hack during the 2016 campaign. Her House spokesman did not respond to The Daily Caller News Foundation’s question Monday about Imran’s employment status. As of Feb. 6, she had declined to fire Imran.

Investigators found that congressional information was being copied to an off-site server and they suspect the brothers of improperly accessing information and stealing congressional property. Chiefs of staff for the employing Democrats were notified Feb. 2.

By 2009, the family was simultaneously managing a full-time car dealership in Virginia, with Abid running day-to-day operations after contributing $250,000 in startup cash. It was called Cars International A, LLC, referred to as “CIA” in court documents.

Imran boasted unusual clout among House Democrats, and was even pictured conversing with former President Bill Clinton. After Rao Abbas, who was owed money by the dealership, threatened to sue amidst allegations of deception and theft, Abbas appeared on the congressional payroll and received $250,000 in taxpayer payments.

Abid had “100 percent control” of the dealership, a one-time business partner said in court documents, in addition to his $165,000-a-year job working full-time for multiple representatives, including Ohio Democrat Tim Ryan and California Democrat Jim Costa.

“He had the dealer license and sole responsibility of running it. Abid would put cars on the lot, take them in consignment, sell them, do all the title work and get money from the retail sale,” according to court documents. Multiple emails show the Awan brothers conducting business such as attending car auctions on weekdays.

“Imram later acted as owner since CIA was considered family business by the Awans,” Abid’s one-time business partner, Nasir Khattak, said in court documents. The car dealership’s finances consisted of Byzantine transfers in which staff and cars were often swapped between it and a dealership next door, Khattak said.

Despite numerous family members making $160,000 congressional salaries, debts went unpaid by the brothers, including to the Congressional Federal Credit Union.

“It was very bad record-keeping in Cars International … it is close to impossible to make any sense out of all the transactions that happened,” Khattak said in court documents.

The $100,000 loan came as the dealership continued to rack up debt, court records show.

“Ali Al-Attar was out of the country as he was involved in politics and the formation of the Iraqi government,” Khattak said in court documents.

In addition to his other jobs, Imran is a real estate agent, and Khattak is also a realtor who obtained the cash from Al-Attar and passed it through bank accounts used for real estate deals in Fairfax County, Virginia.

“Having lost my and Abid’s collective investment of $500k due to Awan’s mismanagement, [CIA] was further in debt $400k to other creditors,” Khattak said in a lawsuit.

Khattak said Imran masterminded the family’s finances and by late 2010, Imran “was running the business in full control” and “instructed Abid not to even speak to anyone.”

The Iraqi cash disappeared amidst a dispute between Khattak and the Awans. Khattak said defaulting on the loan meant Al-Attar now owned the business, but the Awans refused to relinquish control.

In 2012, Abid declared personal bankruptcy, listing more than $1 million in liabilities. While debts to others went unpaid, he kept ownership of two houses, and Imran kept his own substantial property, despite his admitted role in the failed business.

Bankruptcy documents listed Abbas as a creditor and said he might sue Abid, but Abbas later took the brothers’ side in a lawsuit against Khattak, who said that the Awans had somehow manipulated him to do so. Not long after, Abbas appeared for the first time on the congressional payroll, and collected $250,000 from taxpayers through the end of last year.

>>>House Conservatives Want to Know How Rogue IT Staffers Got Away

Abbas’ congressional email was cut off in early February, around the time the Capitol Police revealed that they had uncovered a scheme involving a network of IT aides. The Awans’ access has also been cut off. Reached at a personal email address, Abbas did not respond to repeated questions from The Daily Caller News Foundation.

Abid claimed the Iraqi doctor may never have existed. “If as suspected, all of this is a charade, particularly if it is learned the mysterious Dr. Al-Attar doesn’t exist or didn’t sign the documents, then the whole matter rises to a higher level,” he said in court documents.

The youngest Awan brother, Jamal, was also placed on the House payroll at 20 years of age and makes $160,000, far higher than others in similar jobs.

The Daily Caller News Foundation was the first to identify the brothers and Alvi and now, Sova, and Abbas.