5 Years In, What The Daily Signal Has Achieved 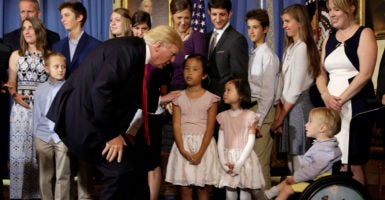 In 2017, The Daily Signal interviewed Marjorie Weer, who was struggling to get her young son, Monty, who had spina bifida, the care he needed because of Obamacare’s impact on health insurance. Later that year, the Weers, including Monty pictured on the far right, would appear at a White House event. (Photo: Joshua Roberts/Reuters/Newscom)

When I first became a reporter, one of the things that startled me was just how many other reporters there were.

Whether I was holding out my recorder to catch what Donald Trump and Sarah Palin were saying in Times Square, or waiting outside the Senate chamber to hear John McCain’s latest take, or standing at the Iowa State Fair to hear Mitt Romney’s stump speech, I was rarely alone. Instead, there was always a pack of reporters, all of us jostling each other to get closer to the lawmaker of the day in order to get a better shot at asking a question and be able to clearly hear.

Then there was the race among all of us—to be the first to tweet the key quote, the first to publish the news article.

Sometimes, between deadlines, I wondered what exactly was the point of all of us getting the same quotes, asking the same types of questions, and then churning out similar stories.

That’s not a question I’ve ever wondered while working at The Daily Signal.

Today, we turn 5—and we’ve, in the spirit of Sherlock Holmes, kept an eye out for the dog that didn’t bark. That’s a promise Rob Bluey and I made from the beginning, and we believe it is still what sets The Daily Signal apart today.

Our reporters have doggedly tracked down the stories that aren’t being told. Here’s just a handful of examples:

–In 2014, just a month after our launch, we traveled to the U.S.-Mexico border in Texas, reporting how illegal immigrants, including children and families, from Central America were able to get across the border without being detected. “Border Patrol agent Albert Spratte describes how human smugglers use jet skis to transport men, women, and children from parkland on the Mexico side of the river to the Texas side. ‘We don’t have a checkpoint at the park,’ he said, making it ‘impossible’ to tell whether people arrived illegally,” reported Josh Siegel.

–In 2015, three years before Christian baker Jack Phillips won his case at the Supreme Court, and two years before his case even reached the high court, The Daily Signal was among the first news outlets to give Phillips’ story national attention. When his case was heard at the Supreme Court, a key topic was how a Colorado official had compared him to a Nazi for not baking a wedding cake—a concern our own Kelsey (Harkness) Bolar had interviewed Phillips about for our Daily Signal documentary.

–In 2016, as reporters descended on Cleveland for the Republican National Convention, The Daily Signal went off the beaten path to tell a story that would foretell the outcome of the presidential election. Reporting from Crawford and Ottawa counties in Ohio, we spoke to residents about their perspective on the presidential contest. Although the counties were political opposites in 2008 and 2012, both voted for Donald Trump later that year.

–In 2017, reporter Melissa Quinn interviewed Marjorie Weer, who was struggling to get her young son, Monty, who had spina bifida, the care he needed because of Obamacare’s impact on health insurance. Later that year, the Weers would appear at a White House event and speak to President Donald Trump and Vice President Mike Pence about their situation—and Monty even appeared on first lady Melania Trump’s Instagram page:

“The stories that aren’t told by the mainstream media are the ones like ours, and millions of others, where choice of providers has been limited to keep costs down and deductibles have skyrocketed,” Weer said.

— In 2018, when pro-gun control students from Parkland, Florida dominated media coverage, Kelsey Bolar and Lauren Evans traveled to Santa Fe, Texas, to tell the school shooting story the media was ignoring. “They came to our town expecting us to throw these rallies, and march for our lives, and lay on the ground with posters. That’s not what we’re doing,” then-17-year-old Grace John, who survived the Sante Fe shooting, said of the media. “We don’t want to wait around and protest for change. We want change, but we don’t want outsiders coming in and forcing it upon us.” She added, “You can’t make stricter gun laws or stuff like that and expect it all to go away.”

–Later that year, Bolar and Evans talked to Brett Kavanaugh’s former female clerks to get a different perspective on the then-Supreme Court nominee than the media’s preferred alternative. “A majority of his clerks have been women,” recounted Rebecca Taibleson. “What that means is that Judge Kavanaugh is really contributing to diversifying this segment of the legal profession. He’s doing that by hiring women as law clerks, but then also by mentoring them and advocating for them throughout their careers.”

— And just weeks ago, Bolar and Michael Goodin teamed up to tell the sobering story of 16-year-old track star Selina Soule, who experienced the effects of transgender ideology on women’s sports. Soule found herself competing against two high school athletes who were born male but identify as female. They took first and second place at Connecticut’s girls indoor track championship and Soule missed qualifying for the 55-meter in the New England regionals by two spots. Bolar and Goodin’s documentary is our most-viewed video ever on YouTube.

When we’re not traveling to communities across America to tell these powerful stories, our team in Washington is holding the powerful accountable. Fred Lucas reports from the White House as our correspondent and Rachel del Guidice keep tabs on Capitol Hill. Meanwhile, Jarrett Stepman is among the most prolific and knowledgeable conservative commentators, who later this year will publish his first book, “The War on History.”

Our coverage isn’t limited to domestic issues. The Daily Signal’s reporting spans the globe thanks to our foreign correspondent Nolan Peterson, who since joining us in 2015 has done everything from embedding on the front lines in the Ukraine-Russia fighting to interviewing people in a migrant caravan in Mexico to visiting ground zero of ISIS’ genocide in Sinjar, Iraq.

As much as our news coverage has shaped The Daily Signal’s work over the past five years, our commentaries have played an equally important role. From the start we’ve labeled every story either news or commentary to help you make the distinction—something few other news outlets ever do.

In our op-eds, we share the bold perspectives too frequently being silenced: “I Go to a School Where an Attack Was Foiled. Here’s Why I’m Against Limiting Gun Rights.”; “My Mom Has the Same Brain Cancer Diagnosis Brittany Maynard Had. She’s Fighting to Live as Long as She Can.”; “I’m a Pediatrician. How Transgender Ideology Has Infiltrated My Field and Produced Large-Scale Child Abuse.”;  and “I Was America’s First ‘Nonbinary’ Person. It Was All a Sham,” to name just a few.

Our commentaries have had a profound impact. For example, following the unexpected death of Justice Antonin Scalia in 2016, The Daily Signal published a list of eight potential Supreme Court nominees for the next president to consider. Among those names was Judge Brett Kavanaugh, who would later be appointed by President Donald Trump. The list, drafted by The Heritage Foundation’s John Malcolm, would later be cited as an influential factor in Trump’s decision.

Beginning in 2017, we’ve rounded up your emails and comments for our weekly “We Hear You” feature. It is consistently among our most-read offerings each week and we’re grateful to have loyal readers who share their perspectives with us.

We wouldn’t be successful without our association with The Heritage Foundation, whose experts are regularly providing valuable insight and research to inform our reporting and robust, fact-driven commentaries.

In this “fake news” era, we’ve adhered to rigorous journalism standards and stayed committed to truth and accuracy. NewsGuard, an organization run by journalists that analyzes news sites’ content, credibility, and transparency and rates them accordingly, gave The Daily Signal a perfect score.

That rating is made possible by the dedicated team of editors whose names you probably don’t often see: Ken McIntyre, Daniel Davis, Sarah Sleem, Jackie Bastasch, and Peter Parisi.

We’ve also stayed committed to being a multimedia news outlet—sharing the news by video, podcasts, and yes, text. In a world where people get news all over the internet, we’re dedicated to producing content accessible on a variety of platforms, including YouTube, Instagram, Facebook, and more.

Clearly our approach has resonated: In these past five years, we’ve had 100 million visitors, 260 million page views, and 400 million video views.

So here’s a piece of real news: We’re thrilled to keep this up—and we hope you’ll keep accompanying us on our journey to provide unique, insightful coverage. Join with us today to support quality journalism by telling your friends and family about The Daily Signal. We need your help to continue growing and reaching more people.