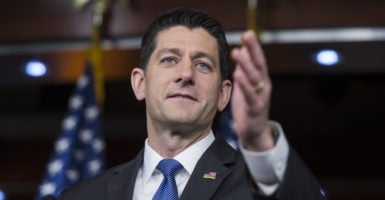 House Republican leaders mapped out their proposal for how Obamacare will be repealed and replaced in a closed-door meeting Thursday, outlining plans for Medicaid reforms and refundable tax credits for Americans.

The plan comes amid mounting frustration from the chamber’s conservative wing, who want to see their leaders move faster on repealing Obamacare and decided to coalesce around their own replacement plan Wednesday after discussions over potential changes to the health care system slowed.

GOP lawmakers said repeatedly they would unwind Obamacare—a promise repeated by President Donald Trump on the campaign trail—but the conference has yet to come together on which parts of the law would be repealed and how.

And members are likely to face questions on Obamacare’s future from constituents on both sides of the aisle when they head home for the Presidents Day recess.

Ryan told reporters on Thursday that upon returning to Washington at the end of the month, lawmakers would introduce the repeal and replace legislation.

However, he noted that GOP lawmakers are waiting on cost estimates from the Congressional Budget Office and Joint Committee on Taxation

“What we’re proposing is a patient-centered system where the patient designs their plan. The patient gets to decide what they want to do,” Ryan said. “The nucleus is the patient and her doctor versus the nucleus of the system being the government in Obamacare’s sake.”

According to a copy of the presentation leaders gave to Republicans that was obtained by The Daily Signal, the plan calls for Congress to pass legislation that repeals Obamacare’s taxes, individual and employer mandates, and subsidies. It also stresses that the Medicaid expansion, which loosened program eligibility requirements, would also be changed.

Specifically, Americans purchasing coverage on the individual market would receive an advanceable, refundable tax credit based on age.

The plan also expands the use of health savings accounts, a policy that is the hallmark of nearly every proposal Republicans have presented over the last six years.

Republicans are generally in agreement on the expansion of health savings accounts and even on providing Americans some form of financial assistance, but GOP members are more divided on how to handle changes to Medicaid.

Thirty-one states and the District of Columbia expanded Medicaid, and had 100 percent of Medicaid costs for those who are newly eligible covered by the federal government from 2014 to 2016. Now, GOP senators representing some of those states have pushed for the expansion to remain in place.

The plan put forth by House Republican leaders would pare down the match rates for the expanded Medicaid population over time, but allow states to continue enrolling new beneficiaries under the expansion’s eligibility. Republicans then propose changing it to either a per-capita allotment or block grant program.

The proposal provides a transition period, though not defined, for states that did expand Medicaid.

To ease the concerns of leaders from expansion states, Ryan said Walden and Sen. Orrin Hatch, a Republican from Utah who chairs the Senate Finance Committee, have been working with Republican governors to discuss potential changes to the program.

The last item in the GOP’s replacement plan calls for the creation of high-risk pools, which would be funded by federal dollars allocated to the states and can be used to help those with pre-existing conditions.

Republicans plan to repeal Obamacare using a budget tool called reconciliation, which fast-tracks legislation in the Senate and allows it to pass with 51 votes.

Their plan is to start with a repeal bill that passed both chambers in 2015, but was ultimately vetoed by President Barack Obama.

GOP leaders are planning to build on the 2015 bill by including parts of Obamacare’s replacement.

Late last month, Ryan mapped out a timeline for Obamacare’s repeal, telling GOP colleagues the House would dismantle the bill in March or April.

But House conservatives are becoming frustrated with the speed leaders are moving and want to see action before then.

On Monday, the approximately 40 members of the conservative House Freedom Caucus voted unanimously to back the 2015 Obamacare repeal bill, and on Wednesday, they endorsed an Obamacare replacement plan released by Sen. Rand Paul.

This article has been updated to clarify the proposal’s changes to Medicaid expansion.