What’s Wrong in Our Arms Treaty With Russia 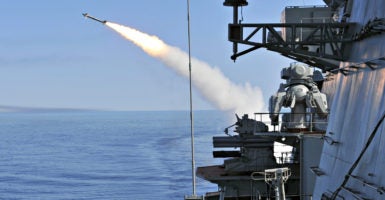 Russia's navy fires a missile during military exercises in May 2016 in the Barents Sea. (Photo: Lev Fedoseyev/TASS/Newscom)

Well, Trump is right: New START is advantageous to the Russians and does not advance U.S. national security interests.

Because of the way the treaty limits were negotiated, the United States had to make the majority of arms reductions, while Russia increased its number of nuclear weapons since the treaty entered into force in 2011.

This means the Obama administration continued reductions of nuclear arms even as the Russians increased the number of their deployed warheads, invaded Ukraine, threatened U.S. allies in Europe, and blatantly undermined U.S. efforts in Syria. Deterrence is about perceptions, and by reducing nuclear warheads in this context, the United States signaled weakness.

The increase on Russia’s part is not a violation of New START, since the treaty has an implementation period that ends next year. The Russians will be in violation, though, if their numbers remain the same or are otherwise above the treaty limits.

But even if the Russians manage to get themselves under the treaty numbers by next year, the increases violate the spirit of the treaty and the lack of U.S. response is bad policy.

Numerical asymmetry is only one of many issues. The treaty’s verification regime is problematic to say the least. While some maintain that New START is more important than ever because of worsening U.S.-Russia relations, the reality is that it is fairly easy for the Russians to deceive the United States, and the inspectors on the ground, about the real number of deployed nuclear weapons.

Negotiating a treaty with better verification provisions would be a sound alternative to the status quo.

Russia’s quantitative warhead superiority is only a part of the story. The Russians have made a qualitative increase as well. Since ratification of New START, Russia has launched the most expensive modernization of nuclear weapons since the end of the Cold War.

Unlike the United States, which extends the life of its 1970s-designed warheads as opposed to modernizing them, Russia develops new warheads and continues to advance its understanding of the effects of nuclear weapons.

Russia also is developing and deploying new ballistic missiles, strategic submarines, and bombers. It will take the United States several decades to modernize all three legs of the nuclear triad.

Arms control must serve U.S. national security interests. We must be willing to walk away when it doesn’t.