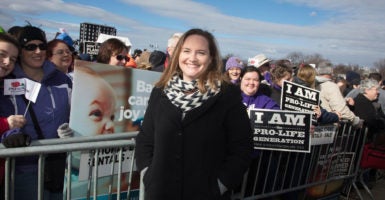 Autumn Christensen, pictured here at this year's March for Life, is dedicated to serving the pro-life cause. (Photo: Jeff Malet)

Autumn Christensen has spent over a decade on Capitol Hill working to advance the pro-life cause, something that has been important to her since she was a girl.

“The more we see, the more we know, and the more likely we are to grow into a country that cherishes life.” —@SBAList’s Autumn Christensen

“I grew up in a pro-life family,” Christensen says in an interview with The Daily Signal. “My grandfather prayed outside of abortion clinics in the ’70s.”

“I remember going with my parents and my younger brother to maternity centers at the holidays, volunteering and spending time with women who were experiencing an unplanned pregnancy. So [it’s] sort of in my nature that it’s one of the most important issues.”

Now Christensen’s work in the movement has brought her to a new position as director of policy at the Susan B. Anthony List, or SBA List, a conservative, pro-life policy organization based in Washington. The job means advancing pro-life policies in cooperation with the White House as well as Congress.

Tommy Binion, director of policy outreach for The Heritage Foundation, says Christensen’s new role is a great gain for the pro-life movement.

“Autumn is the definition of a servant leader both on Capitol Hill and within the pro-life movement,” Binion says, adding:

She combines an unmistakable passion for the lives of unborn children with a shrewd understanding of the law and the legislative process … Her years of service will pay dividends as pro-life majorities in the House and Senate work together with a pro-life president for the first time in a long time.

Christensen, 38, was born Autumn Fredericks in Minnetonka, Minnesota, and grew up in Jackson, Mississippi. She graduated in 2001 from Covenant College in Lookout Mountain, Georgia, where she majored in business and history.

She moved to the Hill in 2002 as a staff assistant for Rep. Dave Weldon, R-Fla. She worked on pro-life issues for Weldon, who left office in 2009, and attended weekly staff meetings for the Values Action Team, an organization of pro-family lawmakers founded in the ’90s by Rep. Joe Pitts, R-Pa.

That involvement introduced her to the organization she would work for next—the Congressional Pro-Life Caucus, a coalition of pro-life lawmakers. The caucus is bipartisan but keeps its membership confidential. “It takes a lot of patience, but each step along the way is both an opportunity to move things forward legislatively and also to educate the public about abortion,” says Autumn Christensen, the new policy director for the pro-life Susan B. Anthony List. (Photo: Jeff Malet)

She started work as caucus director in October 2005. Her predecessor, John Cusey, had urged her to apply as he prepared to leave for a job in the executive branch. It was “an easy yes,” she says, because she respected the work of the caucus and its chairman, Rep. Chris Smith, R-N.J.

‘An Opportunity to Educate’

“When I first started with the caucus, we had Republican control across the board,” Christensen says. “President [George W.] Bush was in office. Then the Congress changed dramatically to Democratic control, and then President [Barack] Obama’s election and …  during the Obama years we were certainly at the height of trying to prevent funding for abortion; we were concerned about the Hyde Amendment being eliminated.”

The Hyde Amendment is a provision, established in 1976 by the late Rep. Henry Hyde, R-Ill., that prohibits use of federal funds for most elective abortions or related health coverage.

Patience is one of the most important virtues for pro-life work, Christensen says.

“My conviction that the unborn are deserving of the same human rights afforded to the rest of us is rooted in biology.” —@SBAList’s Autumn Christensen

“We were really in a very on-defense role,” she says. “And then we had the Republican Congress come in [in 2011] and we had opportunities to start moving pro-life legislation. … It always takes time to enact incremental progress toward reversing the effects of Roe v. Wade.”

Roe v. Wade is the 1973 Supreme Court ruling that legalized abortion across the nation.

As director of the Congressional Pro-Life Caucus, Christensen helped craft bills that would prohibit the use of federal funds for abortion and prohibit abortion of babies who are capable of feeling pain.

“They’re not law yet, but the first step is to get them moving through the Congress and have [lawmakers] first take votes on them,” she says. “They’re an opportunity to educate the public about the dangers of abortion [and] what abortion really is.”

Her faith informs her perspective, she says, but science influenced her pro-life beliefs.

“I’m an evangelical Christian and that has a big impact on my life and worldview,” Christensen says. “However, my conviction that the unborn are deserving of the same human rights afforded to the rest of us is rooted in biology. ”

Christensen’s husband, David, is vice president of government affairs at the Family Research Council, a conservative public policy organization in Washington, D.C. The couple, who met while working for Weldon, now have a 2-year-old son.

Christensen, who joined SBA List on Jan. 3,  is familiar with the struggles that come with advancing the pro-life cause.

She recalls the challenges leading to the 2003 passage and enactment of the Partial-Birth Abortion Ban Act, which prohibits the aborting of a baby after it is partially delivered.

“I was in high school and college [in the mid-1990s] when the Partial-Birth Abortion Ban Act was moving through the House and the Senate, and it was veto after veto from President [Bill] Clinton,” she says. “But even as an average American out there, I knew about partial-birth [abortion] and it was a topic of conversation with friends who had pro-choice views.”

Bills she worked on for the caucus face a similar path, Christensen says.

“You know, we have to continue to push forward and we have to get across that 60-vote hurdle, and we have to get them to a pro-life president’s desk,” she says, adding: “It takes a lot of patience,  but each step along the way is both an opportunity to move things forward legislatively and also to educate the public about abortion.”

The Senate requires 60 votes to end debate and bring legislation to the floor for a final vote.

‘Made Such a Difference’

Marilyn Musgrave, a former member of Congress who represented Colorado’s 4th District and now is vice president of government affairs for the Susan B. Anthony List, said the organization is excited that Christensen is part of the team.

“Autumn has been one of the most knowledgeable people on the Hill in regards to … issues we care about,”  Musgrave tells The Daily Signal in a phone interview. “She made such a difference on the Hill. We are fortunate to have her on board.”

Christensen says she is optimistic about the future of the pro-life movement, especially due to the large involvement of young people in events such as the March for Life, a yearly rally held in Washington to protest the legalization of abortion.

“We know that Americans are becoming more [pro-life],” Christensen says, pointing in particular to younger Americans “looking at those ultrasound images of their brothers and sisters and their cousins and children and family members.”

“I think that the more we see, the more we know, and the more likely we are to grow into a country that cherishes life and wants to protect all unborn lives,” she says.