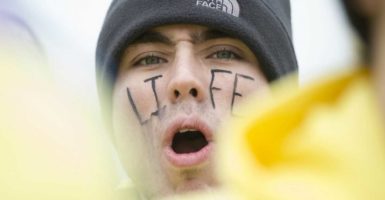 The March for Life will conduct its 43rd annual event in the District of Columbia. (Photo: Molly Riley/UPI/Newscom)

With the nation’s largest pro-life rally less than four months away, March for Life organizers announced the theme for the 43rd annual event will be “the power of one.”

The March for Life, an annual rally in the District of Columbia, protests the legalization of abortion in the United States with the Supreme Court’s Roe v. Wade decision in 1973. It occurs each January and attracts large numbers of pro-life marchers from across the nation.

LifeNews.com estimated that hundreds of thousands participated in the 2014 March for Life. The 2017 event is planned for Jan. 27.

In keeping with the “power of one” theme, Mancini said rally organizers will highlight the legacy of the late Rep. Henry Hyde, R-Ill., who she said embodied a message of hope and the difference a single individual can make in society.

Mancini said the March for Life provides a unique platform to educate society about what she calls the greatest issue of the day, namely building a culture of life.

With that goal in mind, Mancini said,  she and her team “discern very carefully about what our theme should be, knowing that we’ll have the opportunity to reach grassroots pro-lifers, but also to reach Capitol Hill, to reach the White House, to reach the media on what we believe to be the most pressing issues of our time in terms of building a culture of life.”

As in years past, Mancini said her organization wanted to highlight a person who exemplifies how one individual can make a remarkable difference for the pro-life cause.

“One such person who exemplifies our theme, the power of one, is Congressman Henry Hyde,” Mancini said. “He was both a Democrat and a Republican in his life.”

Hyde, who represented the northwestern Chicago suburbs of Illinois from 1975 to 2007, “worked to pass what is arguably the most important and impactful pro-life legislation ever passed in the country,” Mancini said.

She said the 40th anniversary of a measure that bears Hyde’s name is a good time to educate others on the bipartisan nature of his pro-life witness.

“The Hyde Amendment is an appropriations rider that prohibits the use of federal funds for elective abortion or for health benefits coverage that includes elective abortion,” said Genevieve Plaster, senior policy analyst with the Charlotte Lozier Institute.

“As a rider,” Plaster said, “[the Hyde Amendment] is not a permanent law, but it has been included with bipartisan support in every annual federal funding bill, which had been signed into law by every president since 1976.”

Until this year, the Hyde Amendment enjoyed bipartisan support, Plaster said, but for the first time the Democratic Party’s new platform calls for its repeal.

“As far as we know,” explained Plaster, “every member of Congress has at some point in their career voted for the Hyde Amendment—whether it be through voice vote, unanimous consent, or otherwise.”

Because the Hyde Amendment is a rider, an attachment to a bill that modifies it in some way, it is less well-known to the American public. According to Michael New, a visiting associate professor at Ave Maria University, many do not realize that it has saved millions of lives from abortion.

“In my own research at the Guttmacher Institute, they did a literature review where they came up with about 20 studies or so. I found a few extra and I found that there’ve been probably 20-25 studies which show that public funding limits save lives,” New said. “And these are published in a range of peer-reviewed journals on economics, public health, and political science.”

The Guttmacher Institute is a policy organization that researches (reproductive health issues) in the United States and around the world.

New said that the best research that studies public funding of abortions shows that the Hyde Amendment has saved over 2 million lives in the past 40 years and about 60,000 lives per year. For those states that do not fund abortion through Medicaid, New said that one in nine people born to a mother on Medicaid owe their lives to the Hyde Amendment.

Plaster said that even though the majority of Americans may not understand the history behind the Hyde Amendment, most Americans support its policy.

“A national poll conducted by Marist in January found that taxpayer funding of abortion is opposed by nearly seven in 10 Americans,” Plaster said.

“This year we sense that what our culture most needs is hope.” —@jeannemfl

Plaster said she feels this to be the case because she believes many Americans have come to think that abortion is not health care.

“While we can’t know for certain each of the reasons that seven in 10 Americans oppose tax-funded abortion, perhaps we can safely say that Americans simply understand that it goes beyond simply access to health care,” Plaster said.

While Hyde didn’t accomplish all of his pro-life goals. Mancini said, he exemplifies what everyone should aspire to become, since building a legacy in “the power of one” will look different for each person:

My understanding is that [Hyde] had a dream of passing a constitutional amendment that would make abortion illegal and recognize the dignity of the the human person from conception. This was his dream and he felt like he was a failure because that did not successfully pass in the ’70s. And so what he did instead was he introduced a rider [that] has been the most impactful pro-life legislation, literally saving millions of lives.

Mancini said her goal is to begin celebrating Hyde’s legacy now so that by the time the 43rd annual March for Life arrives in January, attendees will be able to appreciate and aspire to replicate his witness.

“So what I would encourage as we’re celebrating ‘the power of one’ and beginning to think about that a little bit more as our theme this year, that we would take our cues from … Henry Hyde, who embodied this theme so beautifully,” Mancini said. “And so what we’re going to do is listen to him and his words.”

This article has been updated to clarify when the next March for Life will occur.